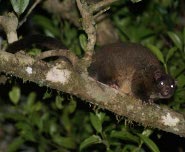 The Lemuroid Ringtail Possum (hemibelideus lemuroides) is a little marsupial that can be found in the rainforests between Ingham and Cairns in Queensland, Australia. An isolated group of these was also located in Mt. Carbine Tableland. This animal is strictly arboreal and inhabits the tropical rainforests above 400 meters (1312 feet). It has been called the Brushy Tailed Ringtail and the Lemur-like Ringtail Possum.

The short face and protruding eyes are similar to the features of a lemur, but it establishes its individuality with its interesting coloring, at times a chocolate brown but less frequently a white color. The white lemuroid ringtail possum was thought to be extinct in 2009 but since then other members of the species with the white coloring have been discovered. One prominent characteristic that is very distinct and makes it recognizable is that it has a bright yellow eye shine at night.

The weight of an adult averages about 1000 grams or 2.2 pounds. The male of the species is typically a little larger and the female a little smaller. Their body is generally about 38 cm or 12 inches long. The lemuroid ringtail possum has a strong prehensile tale that can measure up to 35 cm or 11 inches. It is furry except on the tip. Its leaping abilities are legendary. It uses a membrane between its legs to help it fully extend its limbs and leap an amazing 2-3 meters from one branch to the next.

It is a social animal that makes its home with up to three companions in a single den. Between the months of August and November, these lemuroids focus on breeding activities to make sure that their social world continues to thrive in the future.

Predators of the lemuroid ringtail possum are carpet pythons and Rufous owls. Its biggest enemy, however, is not its predators but man who is destroying its habitat, the rain forests. The Lemuroid Ringtail Possum does not adapt well. For this reason, is on the endangered species list as a Near Threatened (NT) animal.

The Lemuroid ringtail possum is listed as Near Threatened (LR/nt), is close to qualifying for or is likely to qualify for a threatened category in the near future, on the IUCN Red List of Threatened Species

Some facts about the
Lemuroid ringtail possum