The Bear Cuscus -- An Ursine Marsupial 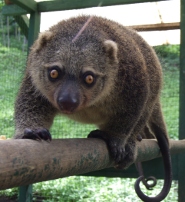 The bear cuscus (Ailurops ursinus), like a platypus, seems to have been sewn together from parts of other creatures. It has a wooly body like a bear and round protruding eyes like a lemur that stare from a possum-like head. Its long and naked tail is prehensile, or grasping, and the bear cuscus uses it, along with its sharp, curved claws, to maneuver through the trees it lives in.

This unusual looking animal, which is actually a marsupial, has earned several names including bear phalanger, Sulawesi bear cuscus. In French, it is called the grand couscous de celebes. Some people also refer to the bear cuscus as a marsupial monkey.

This animal has a total head and body length of approximately 60 centimeters or less than 2 feet, and it typically weighs about 7 kilograms, or about 15.5 pounds. The fur of the bear cuscus is thick and can be black, dark brown or gray in color, while its underbelly is lighter in color. It has little ears, as well as a short snout.

This is an arboreal marsupial that lives mainly in the upper canopy of lowland tropical rainforests. It can only be found in Sulawesi, Indonesia, and nearby islands, including Butung, the Peleng islands, Sangihe, Salidabu and the Togian Islands. Some believe that it may also possibly be found on Muna. The bear cuscus prefers to live in undisturbed areas and does not seem to adapt well to developed areas.

Because it is a marsupial, females bear cuscuses have pouches like a kangaroo. Their babies are born very immature and then continue to grow and develop in the pouch for approximately eight months or until they are strong enough to survive on their own.

The bear cuscus feeds on leaves, preferring young ones, seeds, flowers and unripe fruits. These marsupials use their long tails to hang onto limbs as they search the trees for tasty items to eat with their forelimbs. The bear cuscus is diurnal, unlike other members of its family group, which tend to be nocturnal.

Unlike a primate which will bound and leap through the trees, a bear cuscus moves slowly and carefully from limb to limb. It has also been noted to rest a lot, and researchers believe it is because the food it eats tends to be low in nutritional value. Although not much is known about this animal, bear cuscuses tend to be spotted in pairs.

The bear cuscus is thought to be common in areas where the habitat is suitable for it. However, its population is in decline. In fact, between the years of 1979 and 1994, it is believed that the bear cuscus population in the Tangkoko-DuaSudara Nature Reserve was reduced by 95 percent due to hunting.

This little animal is listed as vulnerable on the IUCN'S Red List of Threatened Species. The main threat and predator of the bear cuscus is humans. It is still hunted for its meat and are also caught and sold as pets. In addition, many of the areas in which this creature lives have been deforested and degraded. Indonesia does have laws in place to protect this marsupial, but enforcement is unfortunately lax.

Picture of the bear cuscus by Sakurai Midori, licensed under GFDL and the Creative Commons Attribution-Share Alike 3.0 Unported license.

The Bear cuscus, bear phalanger is listed as Data Deficient (DD), inadequate information to make a direct, or indirect, assessment of its risk of extinction, on the IUCN Red List of Threatened Species

Some facts about the
Bear cuscus