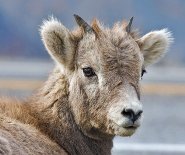 Bighorn Sheep (Ovis canadensis) are sheep that live in North America and Siberia, they have very big horns which can grow to be massive, weighing in at 30lbs (around 14 kilograms). They are named for these massive horns, however only the males have them at such sizes, females have much smaller horns. Their coats range in colors of earthy tones, from browns to grays, and these colors can vary from sheep to sheep. Ewes (term for a female) can weigh 200lbs (~90kg) while rams (term for a male) typically weigh double that amount (400-500lbs or ~ 200-230kg), and sometimes can grow larger depending on the subspecies, while others are much smaller. The sheep usually graze on many shrubs and grasses, and during the winter they focus on the shrubs. They also seek out natural sources of vital minerals where there are salt deposits. A social herbivore, they live in large herds, but lack any real lead ram or ewe. Dominance is established during mating season by the males in a ritualistic event where they ram each other. 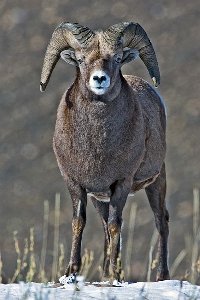 The history of the Bighorn Sheep is a successful conservation story, as around 1800 Bighorns were widespread and numbered in the millions, however a hundred years later by 1900 there were very few left, as their numbers had been cut down to the thousands and were scarcely found in the wild. The reasons for the decline were diseases from domestic sheep, along with competition for food with domestic sheep, and hunting or killing to make room for the domesticated sheep. However, in the 1930s the Boy Scouts undertook a campaign to save the Bighorn sheep in Arizona, as the numbers there were hardest hit and they were at the brink of extinction in that state. Less than 200 were observed in the mountains of Arizona by Fredrick Burnham, and he began the conservation effort. After this more organizations joined the efforts and 1.5 million acres of land were given to help the Bighorn sheep and save it.

Other efforts included the reintroduction to areas it had gone extinct in, along with natural parks, and decreased domestic sheep numbers as the demand for wool went down after the end of the Second World War. Only one subspecies went extinct (Audobon’s Bighorn Sheep which lived in and on the Black Hills), while the rest were able to make a recovery. Today Bighorn Sheep are listed as Conservation Dependant, in that as long as we keep their status quo, do not destroy habitat, or cause competition with domestic sheep, or hunt them on a grand scale, they will continue to thrive.

The Binomial name of Bighorn Sheep is Ovis canadensis, which means it belongs to the Genus Ovis. Ovis consists of all sheep, from the Dall Sheep to the Argali Sheep and the Domestic Sheep. Ovis belongs to the Subfamily Caprinae which includes the goats, antelopes, takins, ibexes, gorals and many others. In this subfamily no less than five species are endangered, eight at risk, seven in a concerned status, and only seven as secure and not at risk of extinction. Caprinae belongs to Bovidae of which there are 140 species, from the extremely large Gaur (endangered) which can weigh 3,300lbs (1500kg) to the tiny Royal Antelope which is about a foot (30cm) at its tallest and weighs as much as an average housecat, and it also includes the domestic cow. Bovidae belongs to Artiodactyla, otherwise known as even-toed ungulates, and in this order pigs, hippos, camels, deer, and giraffes along with many more are a member. Artiodactyla belongs to the Superorder Laurasiatheria which includes the odd toed ungulates, the carnivores, bats, anteaters, moles and shrews, and hedgehogs in their various Suborders and Families. Laurasiatheria belongs to the infraclass Eutheria which is all placental mammals and their extinct relatives. Eutheria belongs to the subclass Theria which includes the Marsupials. Theria belongs to Mammalia, which belongs to the Phylum Chordata in the Kingdom Animalia.

Fact: The Bighorn Sheep is very adept at climbing and does so to avoid coyotes, cougars, and other threats.

Picture of the juvenile Bighorn sheep and the adult sheep by Alan D. Wilson, October 2007 for naturespicsonline.com, licensed under Creative Commons Attribution ShareAlike 3.0

The Bighorn sheep, mountain sheep is listed as Conservation Dependent (LR/cd), the focus of a continuing taxon-specific or habitat-specific conservation programme targeted towards the taxon in question, the cessation of which would result in the taxon qualifying for one of the threatened categories below within a period of five years, on the IUCN Red List of Threatened Species

Namings for the bighorn sheep

Some facts about the
Bighorn sheep