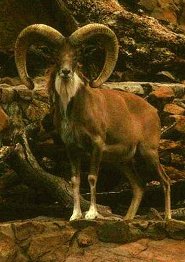 The Urial (Ovis vignei) is a wild sheep subspecies which is found in central Asia from the north of Iran to the west of Kazakhstan, and even in Ladakh, they’re also located in Balochistan. The Urial is noted for its large horns that curl backwards behind their heads and taper off in a large spiral, coming to finish pointing back toward the head – like a twisted letter C. The males have very large horns, as some can measure up to a full meter (about three feet) and they are also tall at being nearly a full meter in height (again, roughly three feet) although they are usually 8-9 decimeters. Their fur is usually brownish red in color, and they have white ‘beards’ on their faces below the mouths in males, while females are almost universally the same color all over with exception to the legs near the hooves.

Like most wild sheep, the Urial is found in hilly terrain, and are herbivores. They eat grasses, and lichen, along with other plants if needed. As social animals they live in flocks, this helps them in many ways. Firstly it keeps predators from singling out and killing one, secondly at night their combined body masses keep them warm, and thirdly it helps keep grazing organized. Most flocks are lead by an older Ram (male) which will guide, and lead the flock. Rams will fight each other with their horns for dominance, and mating rights. This behavior usually takes place in early fall, where the victor will take between 3-6 females as his own. Usually out of this, half will give birth to a single lamb, while others may give birth to two in about five months time.

The Urial is the ancestor of most of the modern domesticated sheep, and from that it is the oldest line of sheep. Because of this, its taxonomy, or rather, its species, is disputed. As of right now the classification that is accepted is that is Ovis Vignei, Ovis being the genus which also includes other sheep such as the Argali, the Domestic Sheep (Ovis orientalis aries), the Mouflon, the Bighorn, the Dall, and the Snow sheep. The genus Ovis belongs to the family Bovidae, which contains 140 different species of clove hoofed animals. Of this family, many names are familiar, as not only does it contain sheep, but it also has gazelles, antelopes, bison, and cattle. All Bovids belong to the order Artiodactyla, also known as even-toed ungulates. In this order you will see giraffes, deer, hippos, pigs, and many more. Indeed, it is thought that cetaceans (whales) evolved from Artiodactyla. This order belongs to the large superorder Laurasiatheria which holds within it the odd-toed ungulates (like horses), Carnivora (bears, dogs, seals, and cats), Chiroptera (bats), and many others (including whales, moles, and hedgehogs). Finally, following the chain up it s infraclass is Eutheria (placental mammals), which is a part of the subclass Theria, and is of the class Mammal.

Urials have several subspecies which are the subject of international dispute. However six subspecies are known, and are mostly named for regions and differences in horns and other characteristics.