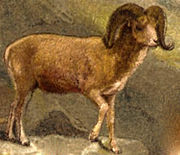 Among all wild sheep, the Argali (Ovis Ammon) is the largest sheep. The males are hunted for their highly impressive and priced horns by hunters. Currently, their subspecies have been recognized and all of them vary both in their appearance and range. Generally, the argali has a light brown colored coat. The legs are white and there is a white patch on its rump. Although both the male and the female have long horns, males have larger and more impressive horns. The length of their horns can be as much as 13% of their body mass. Their corkscrew horns turn towards the front and have formidable weight. A mature argali male can have its corkscrew horns weighing up to 44.09 to 48.5 lbs (20 to 22 kg). Males also have a white patch of hair around their neck and quite a distinct crest along their back, which also complements their striking appearance.

This species is generally found throughout Central Asia, while their subspecies are restricted to different regions such as to the west of Uzbekistan is found the Ovis Ammon severtzovi and the Altai Argali is found to the east of Mongolia. The many habitats of Argali are the mountainous regions at elevations up to 1.300 - 1,600 meters above sea level. These regions are dry alpine habitats.

Argalis are considered to be highly gregarious animals. They roost in large single-sex groups and there can be more than 100 individuals in one group. When the mating season starts, there is a fierce competition among males to get the most receptive female. These competitions are often aggressive and the sound of their clashing horns reverberates in the mountains. Their gestation period is about five months and the female gives birth to one or two lambs. When the activity of giving birth is going on, the females stay away from their herd. The young ones remain veiled in the tall grass while the mother feeds them.

The Argalis are herbivorous animals and feed on herbs, sedges, and grass. During summer, the grass is dried and Argalis are seen migrating to higher elevations in search of food.

There is a serious threat to Argalis throughout their range and some of their subspecies are facing the worst situation and are on the verge of extinction. Since more and more land is being cultivated, their habitats are increasingly at a loss and perhaps, domestication of sheep has also caused a serious threat to their existence. The high cost of their horns attracts hunters throughout their range affecting their population number significantly.

Sustainable organization of the hunting of argalis can make it possible to conserve some of the species of this animal and that is the only hope to save them from extinction. Although controversial, this method can raise the value of argalis among the local people, protect its habitat, and if a careful monitoring of the revenue obtained is ploughed back, then this can do a great deal in conserving this species. The two species that are at the highest risk of extinction are the Ovis Ammon nigrimontana and the Ovis Ammon hodgsonii.

The Argali is listed as Vulnerable (VU), considered to be facing a high risk of extinction in the wild, on the IUCN Red List of Threatened Species

Some facts about the
Argali