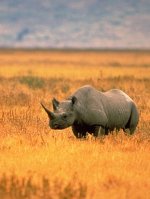 The members of the order of Perissodactyla all have an odd number of toes on their hooves. Living members are from the families Equidae (horses, asses, zebra's), Tapiridae (tapirs) and Rhinocerotidae (rhinoceroses). If you are interested in extinct species, about 10 million years after the dinosaurs died out, the order of Perissodactyla began to rise, with bizarre species like the Chalicothere or check out this giant extinct rhino (twice the size of an elephant).

Animal Diversity on Perissodactyla - great starting point for the "odd-toed"