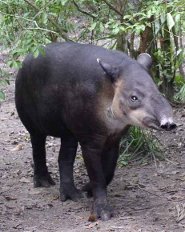 The Baird's Tapir (Tapirus Bairdii) is a strange animal that can be found from the tip of Mexico down to Ecuador. This is the only part of the earth where the Baird's Tapir can be seen.

Physical description of the Baird's Tapir

The Baird's Tapir is a funny looking creature that can weigh from 300 to 600 pounds(150 to 300 kilograms). Their body length is between 70 to 100 inches(180 to 250 centimeters). The Baird's Tapir is often considered pig-like because of its hard skin, long snout, and short legs. Their upper bodies are reddish brown in color, gradually becoming lighter. The Baird's Tapir has white lips, white-tipped ears, and sometimes white on the chest and neck.

The habitat of the Baird's Tapir

The Baird's Tapir live in many different types of habitat. They can be found in mountainous regions, as well as tropical rainforests. They have also been seen in marshes and swamps, woodlands, forests, and mangroves.

The strange eating habits of the Baird's Tapir

The Baird's Tapir is an odd eater. They are strictly herbivores and forage for plants. They will follow a path in a zig-zag pattern. They might eat several types of plant in a single area, or they might eat only one specific type of plant in that area, ignoring the rest. The silly things will also stop eating the leaves on one tree, and move on to another one of the same species, even if the first one still has plenty of vegetation to enjoy.

The behavior of the Baird's Tapir

The Baird's Tapir are excellent swimmers, which is very helpful considering they live in an area with a heavy rainy season. They can paddle, swim, and even dive with ease in the water. They are usually nocturnal animals, as the heat of the day is too much for their bodies. Like a pig, the Baird's Tapir sleep in wallowing holes. Although solitary creatures, they can be heard whistling to each other from distances. When scared, they will hiccup.

The Baird's Tapir will form monogamous couples. The poor female has to endure pregnancy for 400 days. They will give birth to no more than one baby a year. The babies are brown in color, but have unique white stripes and spots on their bodies. Those markings are for camouflage, allowing the baby to hide in bushes for protection.

Predators of the Baird's Tapir

With their thick skin and fast feet, Baird's Tapirs are pretty well protected. However, they do have two predators. First, there is the Puma. This cat will pick off baby tapirs. Then, there are humans, because tapirs are often hunted as food.

The Baird's Tapir is an endangered species

The forests of Central America are quickly being destroyed because of deforestation. The loss of habitat is harming the Baird's Tapir. Also, the tapir is often hunted for food. Since they have such a low birth rate, more tapirs are being killed than are being born. While considered endangered in all of Central America, they are considered extinct in El Salvador.

The Baird's tapir, central american tapir is listed as Endangered (EN), considered to be facing a very high risk of extinction in the wild, on the IUCN Red List of Threatened Species

Namings for the Baird

Some facts about the
Baird's tapir