The Malayan Tapir - One of Nature's Most Primitive Large Mammals 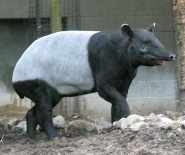 The Malayan tapir (Tapirus indicus) most closely related to rhinoceroses and horses, lives primarily in parts of Indonesia, Thailand and Malaysia. It has also been found to inhabit Vietnam, Cambodia and Laos. Of the four species of tapirs, it is the largest. Its habitat consists of swamps, lowlands, rainforests and hill forests near bodies of water. The diet of Malayan tapirs consists of grass, leaves, twigs, aquatic plants and fruits from low-lying shrubs, with a preference for green shoots.

Malayan tapirs grow 6-8 feet long (1.8 to 2.4 m), are 3-3.5 feet in height (90 to 107 cm) and weigh 550-700 pounds (250 to 320 kg). Females are often larger than males. They are known for their markings, which includes a mostly black body with a large area of white that resembles a saddle. The tips of their ears are also white. These markings help protect the tapir from predators, such as tigers, leopards and humans, as they mistake the tapir for a rock instead of prey. They also have short stubby tails and long noses. Their feet are unique in that the front feet each have four toes, while the back ones each have three. Their eyesight is poor, but they compensate by being able to hear and smell very well.

The Malayan tapir breeding season occurs from April-June. The gestation period is 13 months, with females giving birth to one calf every two years on average. Baby tapirs are born with brown hair and white stripes and spots, which aids in their camouflage. They can live up to 30 years and mature between 3-4 years of age, although they are fully grown by 8 months of age.

Malayan tapirs are primarily, but not always, nocturnal. They often use the same paths to travel in search of food. They are good climbers, often traversing steep slopes and mountains during the rainy season. They are good swimmers. Similar to pigs, they like to bathe and wallow. They are seldom in packs, but are commonly found solitary, except in cases of a mother with its young.

Malayan tapirs were endangered in the 1980s up until 1994. It is now considered vulnerable. The population is decreasing due to overhunting and animal trade. More and more forests are clearing to make room for more agriculture, which results in many Malayan tapirs losing their habitat and dying.

Picture of the Malayan tapir by Sasha Kopf, licensed under GFDL

The Asian tapir, indian tapir, malay tapir, malayan tapir is listed as Vulnerable (VU), considered to be facing a high risk of extinction in the wild, on the IUCN Red List of Threatened Species

Namings for the Malayan tapir

Some facts about the
Malayan tapir