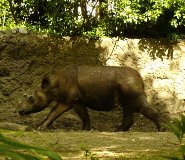 Warning: The Sumatran Rhinoceros (Dicerorhinus sumatrensis) is Critically Endangered, and is at the brink of extinction from human hunting, poaching for their horns, and habitat loss. There are an estimated 300 left in the wild, and a recent rescue effort that ran for 20 years was an abysmal failure. In that program 40 Sumatran Rhinoceroses were captured, tagged, and taken into captivity in hopes of establishing a breeding program. At the end of the 20 year attempt no calves had been born, and nearly all the rhinos were dead – a worse decline than the wild’s current rate. This species is at the very brink of annihilation, but it still is varied enough to be saved with a concerted effort, habitat protection, and poaching prohibition. Of the three subspecies one is already completely extinct – and the other two are very rare.

The Sumatran Rhinoceros is one of the five species left of rhino in the world, it is of those five the smallest and one of the most endangered. Their height at the shoulder is usually around 4-5 feet (1.2-1.5 meters) and they are usually 8 feet in length (2.5 meters). On average they weigh between 1100-1800 lbs (500-800 kg) and have two horns – a large nasal horn with a smaller horn behind it which is usually no more than a stub. Their horns can grow to 10 inches (25cm) in length, and they are hunted for them. One unique feature of the Sumatran Rhinoceros is that it is covered in a reddish-brown coat, and it is sometimes called the Hairy Rhinoceros. The species (not so many years ago) once ranged throughout India, Bangladesh, Bhutan, Malaysia, Indonesia, Laos, Myanmar, and China. However, today they are so few in number that their range is but a speck in a handful of locations. The six locations left are the Tabin Wildlife Refuge in eastern Malaysia on the island of Bonero, the Taman Negra National Park in Malaysia, the Gunung Leuser National Park in Sumatra Indonesia, the Kerinci Seblat National Park in Sumatra Indonesia, the Bukit Barisan Selatan National Park in Sumatra Indonesia, and finally the Way Kambas National Park in Lampung Province of South Sumatra Indonesia.

The Sumatran Rhino is a solitary animal for most of its adult life, with the exception of during mating season and calf care. They communicate vocally, and they stamp their feet, or leave feces as a means of letting others know where they are. One of the difficulties in maintaining a rhino population in captivity is the size requirements – each bull requires up to 20 square miles of territory, while the females require 5 square miles. They spend their days in mud wallows to keep cool, and are active at dawn and dusk for feeding. The wallows serve to also maintain their skin, and health – as captive rhinos deprived of this needed daily mud-bath soon die from diseases, or become very sick with inflamed skin, eye infections, hair loss, and broken skin.

Conservation efforts, as stated, have universally failed with one recent exception. In the United States 7 rhinos were sent as a part of the initial 40, and of them 4 had died. However, the three remaining were monitored, and eventually it was discovered that by supplementing a hormone it was possible for the breeding program to succeed. To date three baby rhinos have been born, the first in 2001, and are healthy. It is hoped that with this recent progress in the United States that the population could be saved. The male was later sent to Sumatra in hopes of helping with the females there, however no success has been reported as of yet.

Fact: The Sumatran Rhino’s closest relative is the extinct Wooly Rhinoceros, which went extinct not more than 8,000 years ago and could be brought back with recent advancements in DNA.

Picture of the Sumatran rhino by nicolaitan, licensed under Attribution ShareAlike 2.0

The Sumatran rhinoceros is listed as Critically Endangered (CR), facing an extremely high risk of extinction in the wild, on the IUCN Red List of Threatened Species

Namings for the Sumatran rhinoceros

Some facts about the
Sumatran rhinoceros