Grevy's Zebra - The Largest of All Wild Zebras 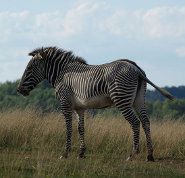 The Grevy%u2019s Zebra (Equus grevyi) is also known as the Imperial Zebra. Among other species of zebra, it is the largest in its family. These zebras are mainly found in the forests of Ethiopia and Kenya. Unlike its other relatives, it is tall and has narrower stripes and large ears. In some of the regions of Kenya, the Grevy’s Zebras coexist with the Plain Zebras. It was this zebra in the zebra family to be discovered by the Europeans and later, used by Romans in circuses in ancient times. The Western world had completely forgotten this species until the 17th century.

Among the wild zebras, the Grevy’s Zebra is the largest of all. Its total length from head to tail is 8 to 9 ft (2.5 to 2.75 m) and it stands 4’7" to 5’3" (1.45 to 1.60 m) tall. Its weight is 770 to 990 lbs (350 to 450 kg). Its stripes are close-nit and narrower, become broad at its neck, and extend up to its hooves. There are no stripes on its belly and at the base area of its tail. The narrower stripes make it easier to hide and escape from the predators in the wild. The large ears are conical and round in shape. The large, narrow, and long head gives it a mule-like appearance. Its mane is tall but erect and the babies have a mane which extends up to the length of their back.

Previously, the Grevy’s Zebra was found in most of Kenya, Somalia, and Ethiopia but now it inhabits only in northern Kenya and in some parts of Ethiopia, that too with a very small population. Since this zebra does not need much water, it fills up the ecological niche between the Plain Zebra who require more water and the African wild ass that follows an arid living style. However, in dry seasons, it requires watered highlands to fulfill its need of water. In draught seasons, these zebras are known to dig holes in soil to defend themselves.

Grevy’s Zebras are herbivorous animals and mostly eat grasses. They also feed on shrubs, fruits, leaves, bark, buds, and roots. Most of their time is spent (60 to 80%) in eating but this also depends on the availability of food. Unlike other herbivorous animals, they can survive on less nutritive diet.

If compared to the ass, the Grevy’s Zebra is quite similar to it in its behavior and living style. These Zebras also roost in small groups with most of them being adults but for a very short time. Adult males like to roam solitarily in their range which extends up to only 2 to 12 km. The female, who wanders in that area, mates only with the occupier male. Like wild asses and other zebras, the Grevy’s zebras also fight with other males over territory and females.

There is no fixed period for mating. Their gestation period lasts for 350 to 400 days. Since newborns follow every moving thing, the mothers have to be extra careful and they are quite aggressive towards other mares. Since Grevy’s zebras have to live in the arid regions, the foals do not drink water for almost three months, they survive only by sucking their mother.

The Grevy's zebra is listed as Endangered (EN), considered to be facing a very high risk of extinction in the wild, on the IUCN Red List of Threatened Species

Namings for the Grevy

A young / baby of a Grevy is called a 'foal'. The females are called 'mare' and males 'stallion'. A Grevy group is called a 'crossing, dazzle, harem, herd or zeal'.

Some facts about the
Grevy's zebra