Burchell's Zebra - Back from the Brink of Extinction, But for How Long? 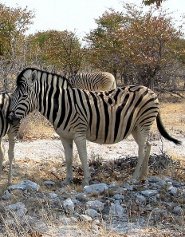 Burchell's zebra (Equus burchellii) (and now Equus quagga burchelli) was thought to become extinct in 1918, when the last Burchell's zebra died at the Berlin Zoo. But after many reports came from Africa about sightings of Burchell's, a major expedition in 2004 showed that Burchell's were not only still alive in the wild, but thriving in the areas of Etosha and Kwazulu-Natal.

But all African wildlife is facing a crisis point, including the numerous Burchell's zebra. With constant civil wars, droughts and an exploding human population, zebra meat is in demand and once wild grasslands are rapidly being turned into farmlands. For thousands of years, zebras thrived despite being hunted by lions, hyenas, leopards and African wild dogs. But they may not be able to escape the most ruthless predator of all -- man.

Burchell's zebras are one of the smallest subspecies, although the mountain zebra (Equus zebra) is slightly smaller. Like domesticated horses, zebras have their height measured from the bottom of their hooves to the highest point of their shoulders, called the withers. Stallions are usually larger than mares. Stallions can reach heights of 57 inches (145 cm) while mares average 43.3 (110 cm.) Stallions weigh up to 847 pounds (385 kg) while mares tip the scales at 385 pounds (175 kg.)

The four subspecies of zebra are difficult to differentiate. But Burchell's zebras tend to have very pale legs that appear white from a distance. Up close, the stripes are either non-existent or a very faint brownish-grey, depending on the individual. Their bellies tend to be the same color as the legs instead of being striped, although there usually is one black horizontal stripe from the chest to the tail. Burchell's black body stripes are thicker than for other zebra types.

It was the latter that got some naturalists and scientists wondering if the Burchell's, plains and possibly other zebra varieties normally were brown and black instead of white and black. One extinct species, the quagga, looks amazingly like a modern day zebra with large brown patches and white legs and a pale belly. Attempts to breed a quagga from zebras has resulted in one colt looking remarkably like any of the stuffed quagga still holed up the world's museums.

The Burchell's zebra, common zebra, painted zebra, plains zebra is listed as Least Concern. Does not qualify for a more at risk category. Widespread and abundant taxa are included in this category, on the IUCN Red List of Threatened Species

Namings for the Burchell

A young / baby of a Burchell is called a 'foal'. The females are called 'mare' and males 'stallion'. A Burchell group is called a 'crossing, dazzle, harem, herd or zeal'.

Some facts about the
Burchell's zebra