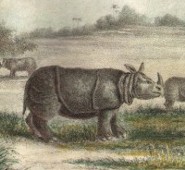 Warning: The Javan Rhinoceros (Rhinoceros sondaicus) is Critically Endangered, and is at the brink of extinction from human hunting, poaching for their horns, and habitat loss. Of those, the main concern is the poaching for their horns which are highly valued among the Chinese, and the indifference among the local populations who see no value in the animal. In 1975 when the CITES (Convention on International Trade in Endangered Species of Wild Fauna and Flora) passed and entered into effect it banned hunting, trading, and any kind of products from the Javan Rhinoceros in international trade. In the black market for their horns, it is estimated that each kilogram (2.2 lbs) is worth over thirty thousand dollars in Unites States currency. Additional threats are as mentioned, with habitat loss being a reason that numbers have not recovered to pre-1900 levels.

The Javan Rhinoceros, related to the Indian Rhinoceros as they are both in the same Genus, is smaller than its cousin at 10 feet in length (3.2 meters) on average and 4.6 to 5.8 feet (1.5 to 1.7 meters) in height. Additionally its horn is quite small, making it all that much more valuable to poachers and the black market. They can usually live for 40 years or sometimes more in the wild, while in captivity it is drastically less due to poor understandings of how the animals lived in the past. The Javan Rhino has no natural predators, with human beings being the only threat to their existence. Solitary animals most their life, they will only be found in pairs when raising young or during mating season. Because of so little research done in the past, and very limited survivability in captivity the Javan Rhino is the least researched rhino of all the species alive today.
There are actually three subspecies of the Javan Rhino, with them all belonging to the Genus Rhinoceros, and the species sondaicus. Rhinoceros sondaicus sondaicus is the type of the three subspecies, and is called the Indonesian Javan Rhinoceros, and currently only 40-50 are alive. Rhinoceros sondaicus annamiticus is the Vietnamese Javan Rhinoceros, and it currently has roughly 12 remaining members of the species, possibly less; one day soon this entire subspecies could and likely will become extinct. Rhinoceros sondaicus inermis was the Indian Javan Rhinoceros, and it is extinct, but before man hunted the last one down it once ranged from Burma to Bengal and it had very small horns (in females there were no horns). The Genus Rhinoceros contains the Javan and Indian rhinos, and it belongs to the Family Rhinocerotiodae.

Rhinocerotidae has all the living species and extinct (over 40) species of rhinoceros currently known. In addition to the Indian and Javan, there are the Sumatran, the Black, and the White Rhino. Rhinocerotidae belongs to the Order Perissodactyla, or Odd Toed Ungulates, which has 14 known extinct families, and three living families, with Equidae and the horses, donkeys, zebras, and more. The other is Tapiridae, with the Tapirs, and finally there is the aforementioned Rhinocerotidae. Perissodactyla belongs to the Superorder Laurasiatheria, which belongs to the Infraclass Eutheria, which are the placental mammals of which all non marsupials and monotremes are members.

At these current rates of loss, the extinction of the Javan Rhino is inevitable, and will come about within the next few decades. There are only two locations in the world that they still live, with the largest population thought to be in Ujung Kulon at the western-most point of Java, in Indonesia. It is populated by only a rough estimate of sixty. The other habitat, in Vietnam in the Cat Tien Park has roughly ten.

The Vietnamese Javan Rhino is expected to be extinct within the next two decades.

The Javan Rhino may be too far gone as it lacks genetic diversity and as a whole may be extinct by the end of the century – if not much sooner due to susceptibility to disease, loss of habitat, and poaching.

The Javan rhinoceros is listed as Critically Endangered (CR), facing an extremely high risk of extinction in the wild, on the IUCN Red List of Threatened Species

Namings for the Javan rhinoceros

Some facts about the
Javan rhinoceros