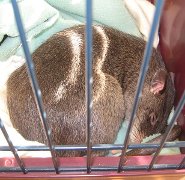 The Gambian pouched rat (Cricetomys gambianus) is truly one of the unsung heroes of the rodent world. Found wild throughout Africa; Gambian pouched rats weigh on average between 1 and 1.4 kilograms (2.2 and 3.1 lb). The length of this rodent can reach sizes of 64 to 91 cm (25.39 to 35.83 in) and beyond, including the tail. The Gambian pouched rat is brown or gray and may have white or lighter colored markings on its feet and belly. It is called a pouched rat because it has large storage pouches in its cheeks, much like a hamster. Omnivorous by nature, captive Gambian pouched rats thrive on a diet of vegetables, seeds, and grains in addition to commercial rodent kibble. In their native habitat of forests and thickets, Gambian pouched rats feed on palm kernels, insects, crabs, and snails. They are a nocturnal animal with keen hearing and smell but poor eyesight. In Africa, they are considered "bushmeat" and commonly captured and eaten. The species is quite common on the African continent and is not endangered.

In the United States, the Gambian pouched rat is kept as a pet, although it is no longer legal to import specimens. Populations of Gambian pouched rats have become a problem in the Florida Keys where they have gained a toehold in the wild. Although it is not known precisely how the rat was released to the wild, it is most likely the result of careless pet owners allowing individuals to escape or deliberately releasing them when they became too hard to handle. Conservationists are concerned that the non-native species could have a serious negative impact on wildlife, particularly birds, as well as pose an agricultural threat if they should move to the mainland. Gambian pouched rats are believed to be one of the species that carry monkeypox and the recent outbreak of the disease in the United States is blamed on rats imported for the pet industry.

In 1996, Bart Weetjens began to experiment with Gambian pouched rats in detecting land mines. Weetjens sought a low-tech method of dealing with the problem of land mines and drew on his childhood experiences with pet rats. Gambian pouched rats have keen sense of smell and can be very docile if they are handled from a young age. Weetjens collaborated with the Belgium Directorate for International Cooperation and established APOPO, a nonprofit organization that trains mine detecting rats in Tanzania. Known as HeroRATS, Gambian pouched rats are trained to smell out explosives. When the rat scratches a patch of ground containing a land mine, a clicker is pressed and the animal receives a food reward.

Gambian pouched rats are also used to detect tuberculosis. Laboratory rats identify sputum samples infected with tuberculosis in a similar manner to rats trained to identify land mines. One rat can work its way through as many as 150 sputum samples in 30 minutes. Tuberculosis is a major health concern in Africa and early detection of the disease is crucial to successful treatment. Gambian pouched rats have been an economical and effective tool in fighting the spread of this disease.

The Gambian rat is listed as Least Concern. Does not qualify for a more at risk category. Widespread and abundant taxa are included in this category, on the IUCN Red List of Threatened Species

Namings for the Gambian rat

A young / baby of a Gambian rat is called a 'kitten, nestling, pinkie or pup'. The females are called 'doe' and males 'buck'. A Gambian rat group is called a 'colony, horde, pack, plague or swarm'.

Some facts about the
Gambian rat