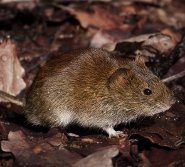 The Bank vole (Clethrionomys glareolus), or more recently, Myodes glareolus is a small rodent belonging to the second largest family of mammals. This vole can be found throughout Eastern and Western Europe, including England, Spain, Italy, Finland, as well as Northern Asia, more specifically in the Ural region. However, the species is considered invasive in Ireland after their accidental introduction in the 1950s.

Bank vole social structures center on female territories. Male home ranges are larger than female ranges and generally overlap with more than one female territory at a time. Bank voles live for a maximum of eighteen months, though many die soon after birth. Approximately half of their lifespan makes up the breeding season, running from March to October, and peaking in June. Bank voles reach sexual maturity after approximately three months, and females give birth to five or six litters a year, with three to six voles in a litter. Adults are known for the rust-colored patch on their back. Bank voles have prominent ears and a tail half of their body length, which can range from 8 to 12 cm (3.1 to 4.7 in). The voles weigh from 20 to 35 grams (0.7 to 1.2 ounces).

Bank voles serve as hosts to a variety of ecto- and endoparasites. Notably, these voles have been shown to harbor four species of nematodes, one species of flea, and at least two species of tapeworms. Predators of M. glareolus include least weasels, tawny owls, foxes, pine martens, and stoats. Predators tend to target larger, reproductively active voles. Bank voles do not exhibit strong anti-predatory behaviors in response to mink. In particular, the highly territorial females tend to stay within their ranges instead of seeking cover. Despite such rampant parasitism and predation, bank voles are in no way endangered; the International Union for the Conservation of Nature has marked their conservation status as of "least concern".

The Bank vole is listed as Least Concern (LR/lc), lowest risk. Does not qualify for a more at risk category. Widespread and abundant taxa are included in this category, on the IUCN Red List of Threatened Species

Some facts about the
Red-backed mouse