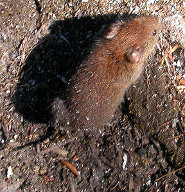 The Southern red-backed vole (Clethrionomys gapperi) hops through the forest, along old logs, across a bed of moss and up a tree stump. Always in a hurry, it sometimes runs but is most often seen hopping along the cool, damp forest floor.
It lives in bogs, swampy areas and coniferous or mixed forests from British Columbia to Newfoundland and in the northern U.S. in the forests of the Rocky Mountain system to Arizona and New Mexico. It lives in North and South Dakota, Minnesota, Wisconsin, northern Michigan and in New England south to Maryland. Also, in the Allegheny Mountain system to North Carolina and the Appalachian Mountains.

Most Southern red-back voles live 10 to 20 months and start breeding at 2 to 4 months. Females typically have three litters of 2 to 8 young per year from late winter to late fall. Gestation is 17 – 19 days and the young are born hairless and pink with closed eyes and ears. By 17 days they are weaned.

The most common predators are Short-tailed Weasels and Broad-winged hawks, but Coyotes and Gray Wolves sometimes make a meal of the southern red-back vole. In the Great Smoky Mountains National Park one was found in the stomach of a timber rattlesnake.

The Southern red-backed vole is mainly vegetarian preferring plant parts in the spring, fruits and berries in the summer and nuts, seeds and possibly mushrooms in the fall. Occasionally, they eat some insects. They store food in the summer and fall that they will eat in the winter, and they also look for seeds, bark and roots. They are active day and night and all year round. They do not hibernate in the winter and hardly ever slow down as they hop through their short active life.

According to the International Union for Conservation of Nature Red List, the Southern red-backed vole is Least Concern (LC) on the endangered species list. This means the population is stable.

The Southern red-backed vole is listed as Least Concern (LR/lc), lowest risk. Does not qualify for a more at risk category. Widespread and abundant taxa are included in this category, on the IUCN Red List of Threatened Species