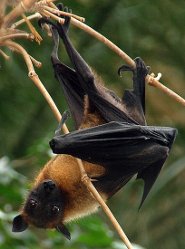 The Indian flying fox (Pteropus giganteus) looks a lot like a cute little red fox with wings. In fact, take away the leathery wings, and the fact that they sleep hanging upside down and it could be possible to forget that the Indian Flying Fox is really a bat. Their delicate, pointy ears, long, thin nose, lush red coat and soulful black eyes have a distinctive appeal that easily resembles the fox they are named after. It’s great size, relative to bats, also helps shape the features that make it more fox-like in appearance. The Indian flying fox has a broad wingspan of up to 130 cm (51.2 inches) from tip to tip and can weigh as much as 2 kilograms (4.4 pounds).

The Indian flying fox is native to the southern Asian continent, most notably in the countries of Bangladesh, China, Myanmar, Nepal, Bhutan, Maldives, Sri Lanka, Pakistan and, of course, India. While their numbers are on the downfall, they are still a common species in their native habitats.

The Indian flying fox spends its life in colonies numbering in the hundreds and even thousands. They prefer locations close to open fields, water sources or where there are a variety of flowers. These areas provide the best sources of their main food source which are fruits and berries. The sizes of the colonies are constantly fluctuating depending on the season. They are larger during rainy seasons that force the bats inside and keep them from spreading out in search of food, and smaller during hot, dry summer months. The Indian flying fox has a five month gestation period and spends an additional five to eight months with its mother. They are mature at two years of age when it becomes an adult member of the colony.

The Indian flying fox doesn’t have many natural enemies in the wild. Man is its greatest nemesis. It is a member of the fruit bat family, and often considered a nuisance, or vermin in their native land because of their widespread numbers and because deforestation has forced the flying mammals toward more urban roosting areas. The Indian flying fox is also hunted in countries such as Pakistan for its fat, thought to have medicinal qualities.

In spite of their great size, and the fact that bat folk-lore tends to make them fearsome creatures, the Indian flying fox is not the least bit dangerous. They do not feed on humans and prefer to stay clear of them. However, they can cause great destruction to orchards and vineyards.

The Indian flying-fox is listed as Least Concern (LR/lc), lowest risk. Does not qualify for a more at risk category. Widespread and abundant taxa are included in this category, on the IUCN Red List of Threatened Species

Namings for the Indian flying fox

A Indian flying fox group is called a 'flock'.

Some facts about the
Indian flying fox