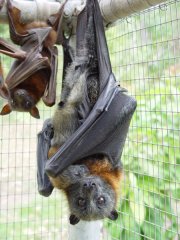 The Grey-headed flying fox (Pteropus poliocephalus) can be found on the south-eastern part of Australia. In 2001 a study shows that their range has shifted 750 kilometers southwards, possibly due to climate change. Their habitat consists of woodlands, rainforests, and swamps. Their diet consists of pollen, nectar and fruit and they are an important pollinator and seed-disperser of the native trees.

Adult males have a maximum wingspan of over 1 meter and they can weigh up to 1 kg. During the day the Grey headed flying fox can be found together with small groups to tens of thousands of bats at large 'roosts' (camps or colonies).

The total population is about 300,000 and it has been suggested that they have declined in numbers as much as 30% in the last decade alone. Recent research has shown that since 1994, more than 24,500 grey-headed flying foxes have died from extreme heat events alone.

The main threats of the Grey headed flying fox are

Interesting fact The Grey-headed flying fox can become very old for a mammal of its size. Reports show individuals surviving in captivity for up to 23 years, and a maximum age of up to 15 years in the wild.

The Gray-headed flying fox, grey-headed flying-fox is listed as Least Concern (LR/lc), lowest risk. Does not qualify for a more at risk category. Widespread and abundant taxa are included in this category, on the IUCN Red List of Threatened Species

Namings for the grayheaded flying fox

A grayheaded flying fox group is called a 'flock'.

Some facts about the
Gray-headed flying fox