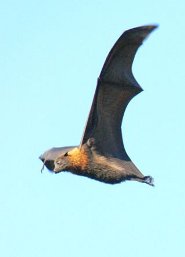 The Large Flying Fox (Pteropus vampyrus) is the second largest bat in the world by weight, and the largest by wingspan. Its species name is P. vampyrus, however it is no vampire bat, this bat is what is called a megabat, being a large fruit bat. They are sometimes called flying foxes; however they have no direct relation to foxes and only resemble them in passing with the face. The Large Flying Fox has a wingspan of seven feet (2 meters), and a weight of 3lbs (1.5kg), has small pointed ears, large eyes, and face that is shaped like a foxes. Its coloration varies from dark ashen brown, to near black, and their toes have large claws that are curved to help grab onto branches. The Large Flying Fox cannot echolocate, as that is specific to the microbats, and one species of fruit bat that has developed echolocation on its own. Instead, the megabats rely on excellent eyesight, and excellent smell to track their prey of fruit, nectar, blossoms, and pollen.

They can be found in Brunei, Cambodia, Indonesia, Malaysia, Myanmar, the Philippines, Thailand, Tonga, and Vanuatu.

Their feeding habit consists of a crash landing into the targeted tree, grappling onto a branch with their powerful claws on their feet, and using their feet, or the clawed digit that we use for thumbs at the top of its wings. They are active mostly in the evening into the night, while during the day they roost in large trees with many of their colony members, sometimes numbering in the hundreds. They communicate with each other in high pitch sounds, and a closely related species has at least 30 distinct recorded calls, therefore it is easy to assume that the Large Flying Fox would also have these calls. Mating season takes place in the warmer summer months when the blossoms and nectar from many flowers are available for consumption, and usually just one baby bat is born at a time. Their feeding habits range, and behavior lends itself to an important ecological niche, as they help pollinate on a grand scale most of the fruit baring trees, and help plant new ones through their digestive system.

The Binomial Name of the Large Flying Fox is Pteropus vampyrus, and it belongs to the Genus Pteropus. Within Pteropus there are roughly 64 known species of bat, and a probably amount on the scale of tens that are currently unknown, and hundreds that have gone extinct – possibly recently; almost all of the species of bats in this genus are threatened or endangered. Pteropus belongs to the Subfamily Pteropodinae, which has around 36 known genera of bat, and an immeasurable number of extinct relatives along with unknown living genera yet to be identified. Pteropodinae belongs to the Family Pteropodidae, which has one other Subfamily - Macroglossinae. Pteropodidae belongs to the Suborder Megachiroptera, which belongs to the Order Chiroptera - which includes all bats. Under the revised model of mammals, yet to be adopted, Chiroptera belongs to the Superorder Pegasoferae, with the other Order being Zoomata, which includes the carnivores, pangolins, and the odd toed ungulates. Pegasoferae belongs to the Superorder Laurasiatheria, which then includes the even toed ungulates, the whales, moles, and many more. Laurasiatheria belongs to Eutheria, or the placental mammals which includes the primates and their relatives, along with rodents and anything that is not a monotreme, marsupial, and is a mammal. Eutheria belongs to Theria, which is all the mammals with the exception of the monotremes.

The large flying fox, within the last six months, has gone from being a species of least concern to a species that is now near threatened and possibly and rapidly approaching the endangered status of "vulnerable" if habitat destruction and hunting does not stop. Being the largest bat by wingspan, and the most visible when in flight, it is no wonder that they make such an easy target for bush meat and those that consider them a delicacy. Unfortunately, if this bat goes extinct or decreases in numbers, plants will suffer due to a lack of pollination and seed dispersal. The consequences are far reaching, as all the megabats are heading toward endangerment or worse.

Picture of the large flying fox by Daniel Vianna Mr.Rocks, licensed under GFDL

The Large flying fox is listed as Least Concern (LR/lc), lowest risk. Does not qualify for a more at risk category. Widespread and abundant taxa are included in this category, on the IUCN Red List of Threatened Species

Namings for the large flying fox

A large flying fox group is called a 'flock'.

Some facts about the
Large flying fox