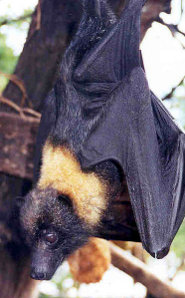 The Mariana Fruit bat (Pteropus mariannus) is an endangered species of bat only found habituating the Mariana Islands, including Guam, and it is directly threatened by human behavior. Poaching has played a role in the decreasing numbers of the Mariana Fruit Bat, along with deforestation resulting in habitat loss and stress. Additionally this bat is found to be a popular local meal; however it is also linked to diseases and is a natural concentrator of pesticides much like other larger animals that accumulate DDT or similar chemicals from their food. Their diet consists of local fruit and nuts found in the trees, which they feast upon with their small but sharp teeth, they only eat plant matter and are of no threat to humans.

The Mariana fruit bat is a mid-sized bat, neither unusually large nor small for flying foxes (a flying fox is the nickname to megabats) and it can weigh up to a full pound (577 grams). Its forearm length ranges from 5 to 6 inches, (13-15.6cm); however the males are usually slightly larger. Their abdomens are usually a dark brown to black, while it has gray hairs throughout that appear to be scattered, their shoulders are usually a light brown or golden color, as are their necks while the head is particularly darker in tone. Individuals have much minor variation, with some having unusually light coloration, and others having much darker – but all within the ranges expected of this bat. They have very large eyes that make it easy for them to see, and rounded ears with a pointed muzzle, giving them the appearance of a canine. This is another reason they are called flying foxes.

The Binomial name of the Marianas Fruit bat is Pteropus mariannus mariannus. They belong to the genus Pteropus, which has some of the largest bat species in the world (P. vampyrus is the largest with a seven foot wingspan), and some of the most endangered species of bat in the world; it contains 64 known species (one was found as recently as a year ago – more are likely to be found). Pteropus belongs to the Subfamily Pteropodinae which contains 36 known Genera – many of which are endangered as entire Genera. Pteropodinae belongs to the Family Pteropodidae, of which there is only one other Subfamily with five Genera of bats. Pteropodidae belongs to the Suborder Megachiroptera of which they are the only member (however this is disputed – some suggest they belong to a new Suborder that also has a few microbat families based on recent genetic studies – if so it would be called Yinpterochiroptera). This in turn, belongs to the Order Chiroptera, which contains all of the bats. Chiroptera belongs to the Superorder Laurasiatheria, of which the ungulates, carnivores, and many other mammals are a member, and that in turn belongs to the Infraclass Eutheria – which is all the placental mammals.

The Mariana Fruit Bat, like other bats, might be a reservoir for diseases like Ebola, Marburg, and other hemorrhagic fevers, along with rabies and quite a few other diseases. They are naturally unaffected by the diseases, however humans are not. Although only a fraction of a percent carries the diseases, there is always the possibility of infection as with any wild animal.

The Marianas flying fox, marianna flying fox, micronesian flying-fox is listed as Endangered (EN), considered to be facing a very high risk of extinction in the wild, on the IUCN Red List of Threatened Species

Namings for the Marianas flying fox

A Marianas flying fox group is called a 'flock'.