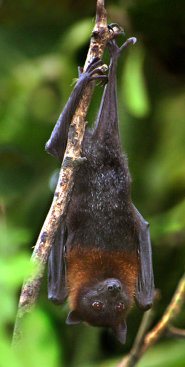 Lyle%u2019s Flying Fox (Pteropus lylei) belongs to the large family of mammalian old world fruit bats or flying foxes. The Spanish name is Zorro Valador De Lyle. As the common name suggests fruit bats live on nectar, pollen, blossoms, and fruit, and for this reason their habitats are limited to tropical and subtropical regions of the world. Old world fruit bats are the largest bats in the world, with wing spans up to 6 feet (1.8 meters) and weighing as much as 2.2 pounds (1.5 kg). By comparison, the size of Lyle’s flying foxes is about mid-sized within the fruit bat family.

Lyle’s flying foxes will colonize trees in large groups, where they nest and suckle their young during the day. At night they depart to forage for food and have been known to travel 40 miles away to find food. Rather than using echolocation as their insectivore cousins do, fruit bats rely on well-developed visual and olfactory senses.

The habitat of Lyle’s flying foxes is limited to Thailand, Cambodia, Viet Nam, and the Yunnan Province of China. Even though little is known about populations within China, Lyle’s flying foxes have been listed by IUCN as vulnerable or one step away from being considered endangered. Until recent hunting restrictions were put into place, fruit bats were considered a delicacy and were hunted legally. Hunting still occurs in some places, but habitat degradation and destruction has also contributed to the 30% population decline over the past 15 years (three generations). In Thailand and Cambodia, Lyle’s flying foxes are considered pests and are not protected except on temple grounds. For this reason, large, noisy colonies of Lyle’s flying foxes can be found colonizing the trees over some Buddhist temples in Cambodia and Thailand. Up to 11 colonies are known to exist in Thailand and the largest contains close to 3000 individuals.

The size of fruit bats can be truly startling when first encountered at night by strangers to tropical climes and has resulted in reports of vampire bats or flying pterodactyls, but unless you’re a fruit or flower, or smell like one, you have little to fear. Okay, a little fear is appropriate. Over the past 10 years or so several research studies have found that fruit bats, including Lyle’s flying foxes, are hosts for emerging viruses that can infect and kill livestock and humans.

Picture of the Lyle's flying fox by Malene Thyssen, licensed under GFDL

The Lyle's flying fox is listed as Least Concern (LR/lc), lowest risk. Does not qualify for a more at risk category. Widespread and abundant taxa are included in this category, on the IUCN Red List of Threatened Species

Namings for the Lyle

A Lyle group is called a 'flock'.

Some facts about the
Lyle's flying fox