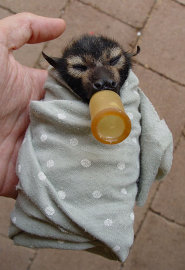 The Spectacled Flying-fox (Pteropus conspicillatus) is a large fruit bat which is also called the Spectacled Fruit Bat, or Spectacled Bat. It lives on the islands of Woodlark, Alcester, Kiriwina, and Halmahera in New Guinea, and is also found in Queensland Australia. This species of bat is listed as a threatened species in the CEPBCA act of 1999 in Australia, and are considered vulnerable because of a decline in numbers from habitat loss, however as a worldwide species the IUCN lists them as being of least concern due to population distribution and stability. This means that although the populations in Queensland are in danger, the species as a whole is not going to go extinct in the near or median future.

Their length from head to toe is 8-9 inches (20-25cm) and they weigh 2.2lbs on average (1kg). They are a large and black bat, and have a grayish yellow striped fur around their eyes, while their mantle is also this same color and follows along their back, their neck, and their shoulders. Coloration varies from individual, and some seem paler, while others more yellowish in color. They have a very sensitive sense of smell, and very good eyesight. Because they are a fruit bat they do not rely on echolocation to track insects - they don’t eat them. Instead they prefer to eat fruit, blossoms, and nectar. Their favorite roosting locations are in the canopies of trees in rainforests, such as mangroves, eucalyptus, or paperbark while in the sun, and colonies can number in the hundreds. They prefer to stay close to these locations as they offer abundant sources of food, shelter, and places to roost at night. When they leave at dusk, they can travel as far as 43 miles (70 kilometers) in search of food.

Like many other megabats, the Spectacled Flying Fox may drink ocean water on the way to the forests to feed, sustaining flight and keeping thirst down. However, for humans to drink seawater without first filtering it - it would cause more thirst, and possibly dehydration.

Photo of the baby Spectacled flying-fox taken at the Tolga Bat Hospital, Australia by Mnolf, licensed under GFDL & CC ShareAlike 2.0

The Spectacled flying-fox is listed as Least Concern (LR/lc), lowest risk. Does not qualify for a more at risk category. Widespread and abundant taxa are included in this category, on the IUCN Red List of Threatened Species

Namings for the spectacled flying fox

A spectacled flying fox group is called a 'flock'.

Some facts about the
Spectacled flying fox