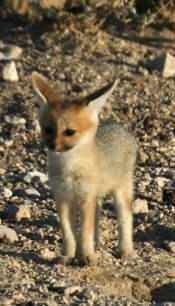 The Cape Fox (vulpes chama)is the only breed of the genus Vulpes in Africa that can be found under the equator. This fox opts for open habitat like savannas and also semi-desert territories and do not like forests. A typical Cape Fox weighs 2.6kg on average. Their covering is silver-gray, with red head and fore limbs.

Normally, the number of newborns ranges from one to four and the gestation time frame goes from 51 to 52 days. The pups usually are born September to November, and both parents take care of the newborns.

The Cape Fox is basically nocturnal, but the newborns play during daytime hours. Cape Foxes hunt for food independently and are not territorial.

The diet of the Cape Fox consists of rodents, insects, rabbits, larvae and in dire circumstances...it has been speculated that they go for livestock. The Cape Fox probably aids to control numbers of some small mammals, which in turn would have effects on the plant groups.

For some areas, the numbers of these foxes are increasing, while in others, it is decreasing. One major reason for the decline is that farmers strongly believe that they kill livestock, but is it true? Top experts say that foxes scavenge on carcasses and would not hurt healthy animals. The concerned farmers do not think so...wikipedia.org/wiki/GNU_Free_Documentation_License" rel='external'>GFDL

The Cape fox, silver fox, silver jackal is listed as Least Concern. Does not qualify for a more at risk category. Widespread and abundant taxa are included in this category, on the IUCN Red List of Threatened Species

Namings for the Cape fox

A young / baby of a Cape fox is called a 'cub, kit or pup'. The females are called 'vixen' and males 'reynard, todd or dog'. A Cape fox group is called a 'leash or skulk'.

Some facts about the
Cape fox