The Tibetan Fox - Silent Stalker of the Steppes 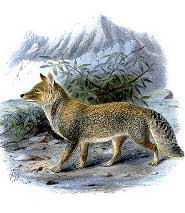 The Tibetan Fox (Vulpes ferrilata), also known as the Wa or Wamo, is a smaller breed of fox that lives in the high altitude grassland plains of the Tibetan Plateau, China and India. They can also be found in the treeless slopes of Nepal, north of the Himalayas. They are characterized by soft, thick red fur with a grey undercoat and a white underbelly with a long, bushy tail that has a white tip. Their dense coat protects them from the fierce winds of the barren landscape. An adult Tibetan fox can grow as large as 2 feet in length (60 to 70 cm) and usually weighs 9 to 12 pounds (4 to 5.5 kg).

Discovered by Brian Houghton Hodgson in 1842, the Tibetan fox is best known for his uniquely square-shaped face and small, triangular ears that are set close to his head. Perhaps the square-shape is to facilitate hunting skills. These foxes have a very keen sense of hearing, making them excellent hunters. This fox lives in a burrow or hollow and rests throughout the day. They are most active at dawn and dusk, hunting for whatever they can find. Mainly feeding on pikas (small, black-lipped, rodents resembling rabbits), the Tibetan Fox are rarely found where pikas are not present. They also hunt other small mammals, lizards, insects, birds, and scavenge on the remains of dead carrion. They begin mating in Late February through the end of March, usually having two to four kits after a 50 to 60 day gestation period. The kits are born in a den or burrow that has been dug by both of their parents. The young kits stay with their parents for about 8 to 10 months and then go off on their own to search for a mate, though not far, as these foxes are not territorial.

The Sand fox, tibetan fox, tibetan sand fox is listed as Least Concern. Does not qualify for a more at risk category. Widespread and abundant taxa are included in this category, on the IUCN Red List of Threatened Species

Namings for the Tibetan fox