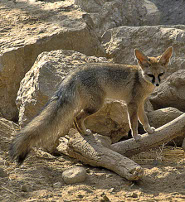 The Blandford%u2019s fox (Vulpes cana), is the second smallest of the fox-like canids. It weighs between 0.9-1.5 kg, or 1.98-3.31 lbs. The length of the head and body is about 42 cm, or 16.5 inches, and the tail length is between 28-30 cm, or 11-11.8 inches. The Blandford’s fox has a very bushy tail and large ears that overwhelm its slender body. The Vulpes cana has a cat-like appearance and demeanor. The muzzle is pointed and has a black stripe starting at the eye and reaching to the top lip. It has a soft coat of rusty brown, grey, and black. The throat and belly are creamy white. Its tail usually has a black tip, though sometimes it has a white one. A black band extends from the neck down the body and tail. The ears are dark brown. These foxes are considered rare, but because of their extreme habitat, not much is known of them. The IUCN classifies the Blandford’s fox as "Vulnerable" because of small population size and data deficiency. Its threats include disease, loss of habitat, and the red fox.

Blandford’s foxes are monogamous. Males and females forage separately. Males and females use neighboring dens while raising young and separate dens for the rest of the year. Breeding can occur from January to February, but in captivity, it can occur until April. Gestation is 50-60 days, and litters include one to three pups. The pups feed only on milk until they are two months old, at which time they will begin accompanying their parents as they forage. At the age of four months, they begin to forage alone. Parents do not take food back into the den.

Blandford’s foxes spend a lot of time in dry riverbeds, where they feast on invertebrates, dead animals, birds, and tree fruit. They make their dens in natural caves and crevices, because they cannot dig their dens. Their life span is about four or five years. Death may come via old age or rabies, or they may fall prey to the red fox. It is possible that they are preyed upon as well by leopards, golden eagles, and eagle owls.

In Arabia, they are found only in the mountains of Saudi Arabia, Oman, Yemen, and United Arab Emirates. They will avoid areas where the red foxes reside. They are also found in the Middle East, Egypt, and throughout Western Asia.

Picture of the Blandford's Fox by Eyal Bartov, licensed under GFDL

The Afghan fox, blanford's fox, corsac, dog fox, hoary fox, steppe fox is listed as Vulnerable (VU), considered to be facing a high risk of extinction in the wild, on the IUCN Red List of Threatened Species

Namings for the Blandford

A young / baby of a Blandford is called a 'cub, kit or pup'. The females are called 'vixen' and males 'reynard, todd or dog'. A Blandford group is called a 'leash or skulk'.

Some facts about the
Blanford's fox