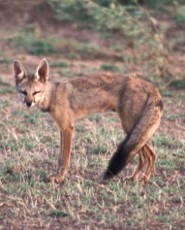 The Bengal fox (Vulpes bengalensis) is the species of fox most often found across the Indian subcontinent and Himalayan foothills, grayer, paler and smaller than its European cousins with the typically elongated muzzle, pointed ears and bushy tale. The Bengal fox typically weighs half of a European fox's weight, between 2.3 to 4.1 kilograms (five to nine pounds;) from the tip of its now to the tip of its tail, it measures 70 to 90 centimeter (28 to 38 inches.)

Within its extensive range, the Bengal fox's preferred habitat is open grasslands or and scrub forest; it's never found in jungles, tall grasslands or steep hillsides. The Bengal fox's favourite time of day is dawn or twilight; it spends the hottest hours of the day hiding from the sun under thick vegetation or dozing in its multi-chambered tunnel.

The Bengal fox is not a pack animal; it's sparsely distributed across its preferred habitat and populations can fluctuate wildly according to the availability of its prey. They live as male/female dyads but generally prefer to hunt alone. Like most foxes, male and female Bengal foxes mate for life and the male and the female share responsibility for the cubs. Their breeding period lasts from December to January, and the males make loud vocalizations throughout the act. Females bear young once a year after a gestation period of a little over 50 days. Average litter size is two cubs but females can bear up to six cubs.

The average lifespan of the Bengal fox is believed to be between 10 and 12 years in the wild. Its main predators are Asiatic wolves, feral dogs and -- man. As human populations expand and the species' preferred grassland habitat is repurposed for agricultural and industrial ends, the Bengal fox's habitat continues to shrink. While no specific conservation efforts have been targeted to the Bengal Fox, extinction is a possibility if its habitat continues to decline. Hunting of the animal is prohibited by the 1991 Indian Wildlife Protection Act, but the animal is occasionally hunted nonetheless since its teeth and tail are prized as folk medicine.

Picture of the bengal fox by A. T. Vanak, licensed under GFDL

The Bengal fox, indian fox is listed as Least Concern. Does not qualify for a more at risk category. Widespread and abundant taxa are included in this category, on the IUCN Red List of Threatened Species

Namings for the Bengal fox

A young / baby of a Bengal fox is called a 'cub, kit or pup'. The females are called 'vixen' and males 'reynard, todd or dog'. A Bengal fox group is called a 'leash or skulk'.

Some facts about the
Indian fox