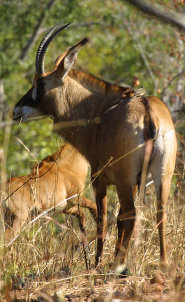 The roan antelope (Hippotragus equinus) appears as if evolution somehow crossed a goat and a horse to produce one of the most common large antelope species found in Central African countries such as Nigeria and Ghana. Both bulls and cows have the cloven hooves and beards of goats, but the long legs and short striped mane of a zebra. They get their common name from roan a color of domesticated horse (Equus caballus.) In horses, roan is a mixture of white hairs plus a base color. In the roan antelope, the colors are vivid white, brown and black.

Domesticated horses did not arrive in Africa until European and Middle Eastern conquerors brought them there. The Linnaean system of taxonomy is based on European perceptions. Since many African countries were colonized by the French, many Africans call the roan antelope "la Antelope Chevaline," or "horse-like antelope." Taxonomists and biologists are unsure if the ran antelope has more than one subspecies.

Roan antelopes have goat-like heads with a broad forehead tapering to a small muzzle. They have long, rabbit-like ears with white insides and dark edges. Their body confirmation is similar to a horse and has a tail and stiff, upright mane like a zebra. Their main coloration is a light brown with a dark dorsal stripe down the back. Their muzzles, hindquarters around the tail and circles around the eyes are white. Bulls have mahogany brown to black heads.

Both bulls and does grow black long, curving horns, but bulls grow longer horns than do does. Bull horns also sport prominent ridges, while doe horns are smoother. Bulls are taller than females. At the highest point of their shoulders, bulls average 4.62 feet (1.4 meters) and females average 4.29 feet (1.3 meters.) Both sexes weigh in at an average of 594 pounds (270 kilograms.) They may not sound like prizefighters, but adult roan antelopes have been known to kill adult lions.

Roan antelopes live in herds similar to wild horses. One dominant male protects a small harem of six to ten females and their offspring. Once bull calves reach sexual maturity at two to three years old, the dominant bull drives them away so they will not compete for breeding rights. This also helps to keep from inbreeding. Although fierce, the roan antelope’s main weapon is their speed. They can gallop up to 35 miles (56.3 kilometers) per hour. Sadly, their speed is no match for a hunter’s gun. The species is being poached for meat and for the spectacular horns.

Bulls rarely fight for supremacy of a herd, but when they do they fight so fiercely that serious injuries or deaths can occur. They clash their horns but also kneel on ground to deliver painful bites. Adults breed year round if food is plentiful. Cows carry their calves for nine months. They usually bear a single calf because a mother cannot produce enough milk to support two calves. With luck, they can live to be 18 years old.

Picture of the Roan antelope by Paul Maritz, licensed under GFDL

The Roan antelope is listed as Conservation Dependent (LR/cd), the focus of a continuing taxon-specific or habitat-specific conservation programme targeted towards the taxon in question, the cessation of which would result in the taxon qualifying for one of the threatened categories below within a period of five years, on the IUCN Red List of Threatened Species

Namings for the roan antelope

Some facts about the
Roan antelope