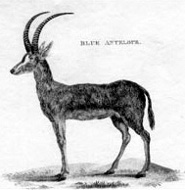 The Blue buck (Hippotragus leucophaeus) or Blue Antelope, sometimes called the Blaubok is now extinct. It is the first "recent" African mammal which has disappeared from the pages of history. It was a relative of the Sable Antelope and Roan Antelope but was smaller than both species. It was a native of the Savannah on the southwestern coastal areas of South Africa. It is thought that during the ice age, it was spread over a quite big range. The bluebuck would prefer only high quality grasses being a selective feeder.

During the 17th century, it was seen in Europe, but up to that time it had already become uncommon. With more and more land being used for agriculture, its habitat area started disappearing and it became an easy prey for the Europeans, although its flesh did not taste good. Up to the 18th century, it became completely extinct. The remains of all the four species of Blue buck (Stockholm, Leiden, Paris, and Vienna), found in different museums, do not show any blue color coat but it was probably because of their mixture of yellow and black hair.

During the 17th and the 18th centuries, the Europeans settled in Cape Colony. At that time, the Blue buck was found in the coastal regions to the southwest of Cape Province and to the east of Hottentots Holland Mountains. At that time also, the animal was not common and could be found only in the grassland area which was not more than 4000 km wide. It was found between the plains of Caledon, Bredasdrop, and Swellendam towns.

The Blue buck was found in the rolling grasslands where the land was quite marshy, in the open grounds with long (0.5 to 1.5 mts) tuft grass and in the hillside shrubs. It was also found at higher elevations, up to 2400 m above the sea level. Places near water were its favorite and it would avoid areas where the grass was short.

Water was an important necessity for the Blue buck. Unlike other antelopes, which can live without water and by just sucking the moisture of plants, the Blue buck had to drink water on everyday basis for its survival. It had very selective choice of food and would eat only perennial tuft grass, spear grass, good quality red grass, love grass, and buffalo grass.

The Blue buck is listed as Extinct (EX), there is no reasonable doubt that the last individual has died, on the IUCN Red List of Threatened Species