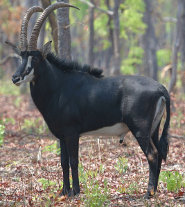 The sable antelope (Hippotragus niger) is one of Africa's most beautiful and striking antelopes. It boasts a dainty head, graceful backward curving horns, a brushy upright mane, and a sleek coat. There are four subspecies of sable antelope including the common or southern, the Zambian or Kirk's, the Roosevelt or Eastern, and the giant or Angolan. Depending on the subspecies, the coat of a mature male sable antelope is typically a dark brown to black in color. The female's coat is generally more a rich sorrel or chestnut in color.

Both males and females have white markings on their face and bellies and a dark marking around the eyes that serve to make them appear larger than they actually are. Females and males both have horns, although those of the males tend to be larger. Baby sable antelopes are born a light sandy brown, and their coats darken as they mature.

The Sable antelope is typically about 4 feet to 4 feet 7 inches -- 117 to 143 cm -- at its shoulder and approximately 6 feet to 8.5 feet -- 195 to 255 cm -- in length. Its weight ranges from 420 to 595 pounds, which is approximately 190 to 270 kg. Younger males are allowed to stay with their herd until they are about three years old. At that point, the head bull will force the young male out of the herd. Young males typically band together to form bachelor groups.

The sable antelope is an herbivore and feeds on grass, trees and bushes. Its habitats of choice are the grasslands and woodlands of the savanna. Sable antelopes normally live within two miles of a source of water. Currently, this animal's range extends from southern Kenya down to South Africa and westwards into central Angola. Giant sables are found only in Angola.

Predators of this large antelope include lions, leopards, wild dogs, crocodiles and spotted hyenas. When pursued, the sable can reach speeds of up to 35 miles per hour. It will also try to defend itself with its horns when cornered.

Currently, three of the subspecies, the Kirk, Roosevelt and Common are listed as Lower Risk-Conservation Dependent by CITES, the Convention on International Trade in Endangered Species of Wild Fauna and Flora. The giant sable, unfortunately, is listed as critically endangered by several organizations, including CITES and IUCN. Over-hunting and loss of habitat are the primary reason these antelope have declined, and it is believed that only 1,000 giant sables remain alive in the wild.

Picture of the sable antelope by Paul Maritz, licensed under GFDL

The Sable antelope is listed as Conservation Dependent (LR/cd), the focus of a continuing taxon-specific or habitat-specific conservation programme targeted towards the taxon in question, the cessation of which would result in the taxon qualifying for one of the threatened categories below within a period of five years, on the IUCN Red List of Threatened Species

Namings for the mbarapi or sable antelope

Some facts about the
Sable antelope