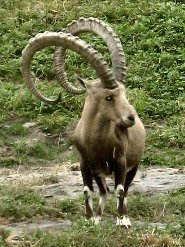 Previously, the Nubian Ibex (Capra nubiana) was known as Capra Ibex nubiana. One can easily recognize Nubian Ibex by its majestic backward-arching horns which are slender, long, and curve toward the outer side at the edge. Its beautiful horns cast a glorious silhouette against the striking rocky mountainous land of its habitat. Although both males and females have horns, males have much larger horns which grow up to 120 cm (48 inches) against 35 cm (14 inches) of females. Coat of the Nubian IbexCapra is light sandy brown in color. Its underbelly is white and its legs are marked with black and white dots. There is a dark strip running downwards on the back of the males and with age, they grow dark and develop a long beard. When the October rut starts, the color of the chest, neck, shoulders, upper legs, and sides turns dark brown which almost looks like black.

The Nubian Ibex is mainly found in Northern Parts of Africa and some parts of Arabia, Ethiopia, Egypt, Jordan, Israel, Saudi Arabia, Yemen, and Oman. Previously, it was also found in Syrian Arab Republic and Lebanon. This species dwells in the rocky deserts on the mountains where the weather is rough and dry at higher elevations which may rise up to 22,000 ft. During summers, the Nubian Ibex moves to mountainous regions to stay away from heat and in winters, it returns to the lower altitudes. The mating in case of Nubian Ibex occurs in late summer, especially in October. The strongest male competes and fights with other males to get breeding rights by pushing other males with its horns. Gestation period lasts for around five months and in March, the young ones take birth. Normally, there is only one young one at a time but sometimes, the female may give birth to twins or even triplets; this, however is a very rare case. At the age of three, they reach their sexual maturity and this is the time to leave the herd. Average lifecycle of a Nubian Ibex can be up to 17 years.

This species has a tendency to remain most active during the daytime and rest at night. It is believed that its light colored, shiny coat reflects the solar radiation due to which it is able to remain active even during the hot summer days. It is a very alert animal and during daytime, it often maneuvers down steep and precipitous regions to graze leaves and grasses and later, returns to the rocky areas at night. It usually faces danger from such predators as eagles, bearded vultures, and leopards. When threatened, it rises on its strong hind legs and faces the threat by pointing its powerful-looking horns at the predator.

Picture of the Nubian Ibex by Stavenn, licensed under GFDL.

The Nubian ibex is listed as Endangered (EN), considered to be facing a very high risk of extinction in the wild, on the IUCN Red List of Threatened Species

Some facts about the
Nubian ibex