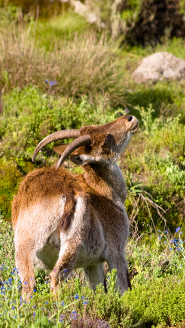 The Walia ibex (Capra walie) is a species of wild goat that is found exclusively in the mountains of northern Ethiopia. It is also known as the abyssinian ibex. Nearly all of the remaining endangered population resides along 25 kilometers (15.5 miles) in the Simien Mountains National Park. These mountains are characterized by huge gullies and gorges, where the very agile Walia ibex are able to inhabit even the most slippery, remote rocky cliffs and survive on very sparse vegetation.

It is the striking coloration and magnificent arching horns that distinguish the Walie ibex from other species of ibex. They have a beautiful chocolate-brown to chestnut-brown coat that is greyish-brown around the muzzle and a lighter gray around the eyes and along the legs. Their bellies and inside legs are white and the mature males sport black beards. There are also contrasting black and white marking patterns along the legs. Adults males generally weigh 80-125 kg (180-280 lb) and have very large horns that arch backwards in lengths up to 110 cm (43.3 in). Females also have horns, but are smaller and thinner than males with paler color markings.

Walia ibex actively move and feed only during the early mornings and late evenings. During the middle of the day, they are very lethargic and hide under dense brush to avoid the intense sun and predators. They are herbivores with diets consisting of bushes, lichens, grass, herbs, shrubs and creepers. It is not unusual to see them standing up on their hind legs to reach the tender, new leaves of bushes and shrubs. They live in herds consisting of five to twenty animals, but the older males tend to be more solitary except during mating seasons. Most of the herds consist of females and their offspring. They reach sexual maturity at one year of age. The only known predator for the adults is the hyena, but the young are also often hunted by a variety of fox and cat species.

Due to rapid population declines, the Walia ibex is classified as a critically endangered species. In 1963, only 150-200 of these animals were surviving. Mainly through the protection they have received after the establishment of the Simien Mountains National Park around 1969, their populations have increased to around 500 individuals. However, habitat loss and poaching still pose major threats to their survival. Important grazing areas have been lost to human settlement, livestock raising and cultivation. Additionally, illegal poaching by local people for the meat, hides and horns of the ibex continues to be an ongoing problem.

The Walia ibex is listed as Critically Endangered (CR), facing an extremely high risk of extinction in the wild, on the IUCN Red List of Threatened Species