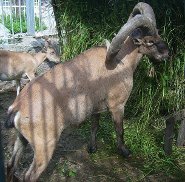 The East Caucasian tur (Capra cylindricornis) is a type of goat that dwells in the eastern Caucasus Mountain range. It grows to be approximately one meter (39 inches) in height and weighs approximately 60 kilograms (130 pounds). They are quite large in stature but have relatively narrow torsos along with short legs and are typically dark chestnut in color during the winter with a lighter chestnut coat during the warmer, summer months. The males of the species have horns that are similar to a lyre in shape and generally stretch for about 90 centimeters or 35 inches. The females have horns as well although they are usually less than half the size of the male horns, about 30 centimeters (12 inches).

The East Caucasian tur generally lives in the terrain between 800 meters and 4,000 meters above sea level. They consume primarily leaves and grasses with their predators typically being lynxes or wolves. The females generally live within herds that consist of about 10 goats but the males are typically solitary.

The breeding of the species occurs between late November and early January with the births of the young occurring during May and June. The gestation period is quite short, typically about 150 days. The young are quite agile and are able to traverse over the steep crags within only a day or two. They suckle for between two and four months but begin to eat grasses after about one month.

During the warmer months, the animal feeds in intervals during the night, later afternoon, and morning periods. The warmest hours during the day are typically spent with the tur resting in a sheltered location. In the winter, the herds of East Caucasian turs remain in open fields during the day, occasionally resting and grazing. They can travel for long distances throughout the day, typically between 15 and 20 kilometers or 9.3 and 12 miles.

The East Caucasian tur migrates seasonally particularly during May and October. The distance of the migration typically is about 1500 to 2000 meters. The adult male East Caucasian tur typically lives at higher altitudes than the females and the young. They generally travel downwards during mating season. The breeding season typically brings about a rise in male competition for breeding females.

The East Caucasian tur is currently listed as a vulnerable species (VU) although they are, as yet, not an endangered species.

The East caucasian tur is listed as Vulnerable (VU), considered to be facing a high risk of extinction in the wild, on the IUCN Red List of Threatened Species

Some facts about the
East Caucasian tur