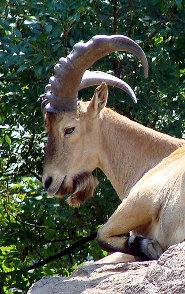 The West Caucasian tur (Capra caucasica) is a goat antelope that can be found in the western portion of the Caucasus Mountains, primarily in Russia and Georgia. This large, horned animal has features that are similar to goats, sheep, and antelope. The population of the species is approximately 5000.

The West Caucasian tur has two different coats for cold and warm seasons. The winter coat is a dull, gray-brown, and the summer coat becomes a deeper rusty gray. The undercoating of the animal is yellow, and the legs are dark. The Caucasian tur has distinctive horns which are deeply ridged and shaped like a broad-tipped sword. Males are bigger than females and have larger horns which can grow as long as 70 centimeters (28 inches). Males typically weigh between 65 and 80 kilograms (140 and 176 pounds), while females weigh between 50 and 60 kilograms (110 and 132 pounds). Males are also taller than females and grow to be about 110 centimeters (43 inches). Females grow to approximately 90 centimeters (35 inches).

The range of the West Caucasian tur is found in the Caucasus Mountain region and is no longer than 30 kilometers. The animals inhabit regions that are located between 800 and 4000 meters above sea level. Caucasian turs prefer forest-filled, snowy slopes, and males seek out higher altitudes than females do. Females travel in herds of ten, but the males often remain solitary. The size of the herd grows in the winter time, and the female group may double in size. A herd can travel up to 20 kilometers a day, but this amount lessens in the cold weather. The diet of the Caucasian tur consists of a large variety of plants and grasses. In the winter, the animals graze on evergreen trees, and they seek out salt licks during all seasons. Caucasian turs breed from November to early January, and females give birth between May and July. The young are born within site of the herd and begin to travel with the group almost immediately.

The West Caucasian tur is considered an endangered species because of the trend in population decline. Numbers have significantly decreased by over 50 percent in the last twenty years. Caucasian turs can live to be fifteen years old, however most die by the age of ten. The main predators of the species are lynxes and wolves. Other causes of death include poaching, avalanches, and habitat loss.

The West caucasian tur is listed as Endangered (EN), considered to be facing a very high risk of extinction in the wild, on the IUCN Red List of Threatened Species

Some facts about the
West Caucasian tur