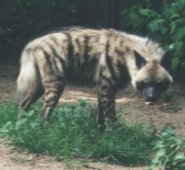 They have big heads, big eyes, and ears that are also big, yet this is not a giant animal. The Striped Hyena (Hyaena hyaena) has a strong jaw, and both genders do not have a significant difference in appearances. The coloring of the coat is either gray or brown, and dark stripes run the length of the Striped Hyena's body. In captivity, it could reach a life span of 24 years. Striped Hyenas live in thornbrushes, stony and desert grounds.

Thought of as a solitary being, the Striped Hyena has a complicated social setup. The striped hyenas do not emit whooping calls that the spotted hyenas emit. Instead, the former have greeting rituals, and far-distance communications are done via scent-marking. More often than not, the Striped Hyena is nocturnal, foraging alone or with a single companion. Group member may eat at a single setting, but it is a very rare occurrence. Fact is, they would avoid competitions over food, and speaking of foods, they are scavengers adn they spend a lot of time looking for carrion.

The newborns are blind, and they are produced after a gestation time of about ninety days, approximately. The female has half a dozen nipples, while the brown kind has less. The adults would bring food to the "nesting dens" to feed the young.

Just like so many other animals, the numbers of these hyenas are going down. The question now is: are they endangered at present? Not yet, but they are rare, and this rare could become 'threatened' sooner or later. This is due to two main reasons: habitat destruction and hunting. Those in the Arabian Peninsula are facing extinction actually, and if mankind does not do something dramatic to meet this developments, this kind of hyena may totally disappear in this part of the globe.

Interesting fact: This hyena could be called a "master scavenger", it is capable of digesting things other animals would not dare "touch". One could take in bones, while indigestible matters such as horns are regurgitated.

Picture of the striped hyena by Martin Bayer, licensed under GFDL

The Striped hyaena is listed as Near Threatened (LR/nt), is close to qualifying for or is likely to qualify for a threatened category in the near future, on the IUCN Red List of Threatened Species

Namings for the striped hyena

Some facts about the
Striped hyena