The Black Rat - and its 'tall tails'! 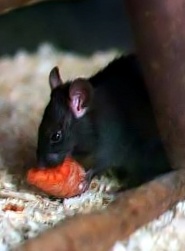 The Black Rat (Rattus rattus) is also known as ship rats, house rats and roof rats. They have acquired these names because of their preferences for inhabiting large ships and nesting in high places such as trees and the upper floors of buildings. These rats thrive in areas inhabited by humans and are found on every continent (thanks to their instinct for ‘stowing away’), near coastal areas. Tropical regions are where they flourish but some data shows that they have been able to adapt to colder climates; this being due to the fact that Norway rats have pushed them out of many of their original habitats. This species rarely swims and is not found in aquatic areas or sewers, preferring instead, forests, agricultural areas, grasslands and any place that supports their mainly vegetarian diet.

Males of the species are often heavier and longer than females and are not solely identified by being black in color; in fact, the rats can be brown, white, grey or agouti. They weigh between 70-300 grams (2.5-10.6 ounces) and are 16-22 centimeters (6.3-8.7 inches) in length. Interestingly the tail of a black rat almost always measures longer than the rat’s body, at about 19 centimeters (7.5 inches) in length.

The species mainly eats fruits, vegetables, grains and vegetation but is an omnivore and has occasionally been known to eat insects or invertebrates. It needs only 15 grams (.52 ounces) of food and 15 milliliters (.51 fluid ounces) of water a day to survive. Its predators consist of house cats, birds and other carnivorous animals. This species of rat is plentiful in many areas and therefore, is not in any way endangered.

Female rats will produce up to 5 litters per year with the gestational period ranging from 21-29 days. Breeding occurs year round and the young are made independent from their mothers between 3 and 4 weeks of age. They begin reproducing at 3 to 5 months old. Males do not have much to do with raising the young as they move from one female to another, mating. Nests, which are made out of sticks and leaves and sometimes found in burrows, are tended by the females.

Black rats are very vocal animals and are known for stripping bark off trees and contaminating human food sources. However, they are probably best known for being the animals that carried the fleas which spread the bubonic plague.

Picture of the black rat by Liftarn, licensed under GFDL

The House rat is listed as Least Concern (LR/lc), lowest risk. Does not qualify for a more at risk category. Widespread and abundant taxa are included in this category, on the IUCN Red List of Threatened Species

Namings for the house rat

A young / baby of a house rat is called a 'kitten, nestling, pinkie or pup'. The females are called 'doe' and males 'buck'. A house rat group is called a 'colony, horde, pack, plague or swarm'.

Some facts about the
Rat