Brown Rat - A Rat By Many Other Names 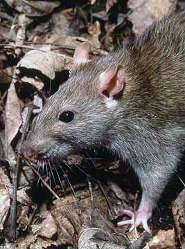 The Brown rat (Rattus norvegicus) is an interesting creature for a number of reasons. Averaging at 18 cm in length, or 7 inches, and with an average weight of 300 grams, or 10.5 ounces, the brown rat has nevertheless managed to spread itself to most parts of the world. With the exclusion of the polar regions, the Canadian province of Alberta, and special areas of New Zealand, the Brown rat has essentially tied its migratory patterns to large concentrations of humans. Why so interested in humans? The answer is simple: one man's trash is another rat's treasure.

The origin of the brown rat is debatable, but as their scientific name implies, the original theory was that they spread from Norway into the rest of Europe, and from there the rest of the known world. Even today the exact origins of the brown rat are not known, although it is generally accepted to have originated somewhere in Asia, and then spread via English trading ships. The reason for the ease with which it spread lies in its diet; the brown rat will eat practically anything.

The brown rats love of starch and protein rich foods has left it with a love of cereal specifically, but it is not above adapting to the environment it inhabits. The brown rats are foragers, which means they will scour any remains for food, including any trash left in the open by humans. This is what keeps these two species inextricably linked. While its status as a forager might give the impression of an unintelligent animal, the truth is actually quite the opposite.

Recent research has found evidence to suggest that brown rats are one of the few creatures on Earth, besides humans and certain primates, to possess the ability to essentially think about thinking. Coupling this with the social hierarchy they form within their own clans, with each rat assigned a specific role, and it's easy to see the links between these "simple" foragers and their "civilized" human counterparts.

While the brown rat does have predators in such creatures as cats, foxes, dogs, and owls, their high reproductive rate and general survival skills keep them on the opposite end of the endangered species spectrum. Pest control actually dedicates much of its time and resources to wiping out large concentrations of brown rats in human settlements, but their adaptive strategies and low standards for food quality make them a difficult creature to deal with efficiently. Truly, the brown rat is the smartest garbage disposal on Earth.

The Brown rat is listed as Least Concern (LR/lc), lowest risk. Does not qualify for a more at risk category. Widespread and abundant taxa are included in this category, on the IUCN Red List of Threatened Species

Namings for the brown rat

A young / baby of a brown rat is called a 'kitten, nestling, pinkie or pup'. The females are called 'doe' and males 'buck'. A brown rat group is called a 'colony, horde, pack, plague or swarm'.

Some facts about the
Norway rat