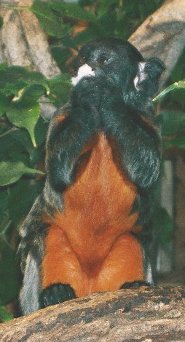 The Red-chested mustached tamarin (Saguinus labiatus) is a stealthy hunter that hides in bushes and patiently waits for frogs, snails, lizards, spiders and other insects to be within reach before it pounces and makes a meal of them. Its diet also consists of flowers, nectar and fruits.

The Red-chested mustached tamarin resides in the upper layer of the rainforests and swamps of Brazil and Peru. They often mingle and form groups with the Saddleback Tamarin, which is smaller in size. The Red-chested mustached tamarin weighs between 491 and 529 grams or 1.08 and 1.17 pounds. Its head and body ranges in length from 23 to 30 cm or 9.1 to 11 inches, and its tail length is 34 to 41 cm or 13 to 16 inches.

The most distinguishable features of the Red-chested mustached tamarin are also the reasons for its name. It has bright reddish hair on its stomach, along with white hair that surrounds its lips and nose, giving it a mustached look.

This tamarin is known for its long calls, which consist of individual syllables. It has been found that the acoustic structure of the call is different between each group. Studies on males and females of different groups have shown that the females can distinguish the calls of the males from their own population and responds to them differently than calls from an unfamiliar population. This is most likely due to the fact that much of the population lives in a remote area of the Brazilian Amazon and is not hunted in any great number; however, they are sometimes captured and kept as pets. They have no known major threats and are very adept at avoiding predators by carefully choosing their sleeping spots, usually in tree branches 12-18 meters (39 to 59 feet) above ground.

A female will be pregnant for almost 5 months and will usually give birth to twins. The babies are raised by the entire group, which is between 4 and 15 individuals, and are not weaned until they are almost 8 months old. The Red-chested mustached tamarin has a long lifespan, approximately 21 years.

The Ed-chested mustached tamarin, red-bellied tamarin is listed as Least Concern. Does not qualify for a more at risk category. Widespread and abundant taxa are included in this category, on the IUCN Red List of Threatened Species

Some facts about the
Red-chested mustached tamarin