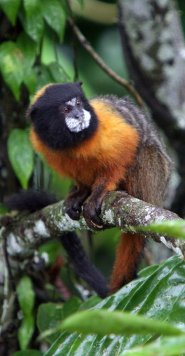 The golden-mantled tamarin (Saguinus tripartitus) is a neotropical species that can be found between the Rio Curaray (Ecuador) and the Rio Napo (Peru). You may also find it east of the Andes mountains, as high as 400 meters above sea level.

It prefers lowland evergreen rainforests and lives in the trees. You rarely see it on the ground. It weighs between 290 to 420 g and its body is between 218 to 240 mm long. When you add the tail, it is between 316 and 341 mm long. Its face is white and its head is covered with black fur. Its tail is usually black on top and orange underneath. You will find a patch of cream-colored hair on its lower back.

The Golden-Mantled Tamarin lives is groups. Only the dominant female mates, and she will usually mate with several males. Usually, only two babies are born, and two or more males help care for the twins. The other females’ ovarian cycles are suppressed while they are living with a group. The average lifespan is only about six years.

These are social animals, and they have a defined social hierarchy while in a group of two to eight members. The Golden-Mantled Tamarin determines the social hierarchy by scent marking. Typically, there is an average of 13.5 animals per square kilometer. The species is listed as "near threatened" by the International Union for Conservation of Nature and Natural Resources. Its population has not been affected by humans yet, but because of the discovery of oil in their habitat, it is expected that the area will suffer high rates of deforestation, thus causing their population to decline by 25 percent over the next 18 years.

The Saguinus tripartitus eats insects, small vertebrates, flowers, nectar and fruit. If it senses or sees danger, it has a specific warning call, and the group may gang up on predators like a mob, though, if they can, they avoid areas frequented by their predators, usually birds of prey. It is also hunted by snakes, tayras and ocelots.

Picture of the Golden mantled tamarin by lowjumpingfrog, licensed under the Creative Commons Attribution 2.0 Generic license.

The Golden-mantled saddle-back tamarin, golden-mantled tamarin is listed as Least Concern. Does not qualify for a more at risk category. Widespread and abundant taxa are included in this category, on the IUCN Red List of Threatened Species