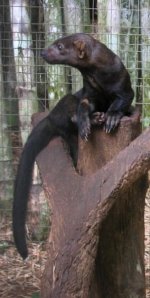 The Tayra (Eira barbara) lives in the evergreen forests of America, Central and Southern parts. Tayras have also been known to exist in Trinidad. A Tayra is a long weasel, with a bushy tail, a long neck, with low-hanging and rounded ears. The color differs from one place to another, but in the main, a Tayra has a brown body with lighter-shaded head, and on its chest, a patch is present. They have dark muzzles, long claws that are used when they go on their climbing adventures.

What does a Tayra consume to live: it is omnivorous, they choose smaller mammals(like the rat) but they have been known to eat reptiles, vegetables and fruits.

It produces its litter (2 to 3) after gestating for seventy days, approximately.Newborns would open the eyes when they are 35 to 58 days old, and nursing occursfor 2 to 3 months, again, on the average. Captivity-wise, longevity is up to 18 years. They are diurnal, living in family sets. One impressive thing about them isthat they are both be terrestrial and arboreal, which helps them escaping from chasing predators.

These weasels had been used by different peoples for rodent-hunting. It has beenknown that they also feed on sugar fields and poultry, it cannot be said that they do drastic harm to the economic side of human's life.wikimedia.org/wiki/User:DirkvdM" title="" rel='external'>Dirk van der Made, licensed under GFDL.

The Tayra is listed as Least Concern (LR/lc), lowest risk. Does not qualify for a more at risk category. Widespread and abundant taxa are included in this category, on the IUCN Red List of Threatened Species

Some facts about the
Tayra