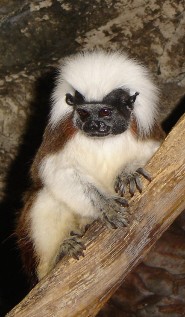 The Cotton-top tamarin (Saguinus Oedipus) is a New World monkey that is native to the humid and dry deciduous forests of northern Columbia. This little monkey is instantly recognizable for the shock of white hair on top of its head that falls back over its shoulders, making it look like an aging rock star or an eccentric mad scientist.

The Cotton-top is a barefaced tamarin, so characterized because the facial hair is fine and short and makes the animal appear to have a hairless face. Below the white crest hair on the head, the animals have a mottled gray-brown coat on their shoulders, back and rump, white limbs, and reddish patches on the inner thighs. The average height for both males and females in the wild is 23.2 centimeters (9.13 inches), including the tail, with an average weight of 450 grams (15.9 ounces).

The habitat of the Cotton-top is between the understory and the canopy of the tropical forests, where they forage for insects, fruit and plant exudates (tree sap and gum). Cotton-tops require a high-energy diet due to their diminutive size and fast metabolisms, and they play an important ecological role as being a highly efficient seed-disperser in their tropical ecosystem.

The Cotton-top tamarin is a highly social animal, and they live in cohesive groups of up to a dozen individuals that are usually headed by a dominant breeding female. Care of the young in the group seems to be a shared responsibility, with mothers, siblings and unrelated adult males taking turns carrying and grooming infants and young. Cotton-tops also have a highly developed system of vocal communication, using whistles, chirps, hoots and staccato long calls. Researchers have identified 38 distinct calls that appear to conform to grammatical rules.

The range of the Cotton-topped tamarin in the wild has been greatly reduced due loss of habitat through deforestation, and is now limited the remnant and secondary-growth forests of northern Columbia. The wild population was also severely impacted by the capture and export of tamarins for medical research and the pet trade through the 1970s. Today the wild population of the Cotton-topped tamarin is estimated to be less than 6,000 individuals, and the species is listed as one of the world’s 25 Most Endangered Primates.

The Cotton-headed tamarin, cotton-top tamarin is listed as Endangered (EN), considered to be facing a very high risk of extinction in the wild, on the IUCN Red List of Threatened Species

Some facts about the
Cotton-top tamarin