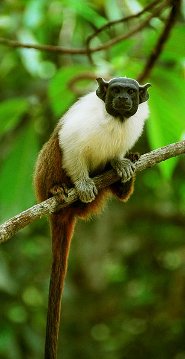 The Brazilian Bare-Faced Tamarin (Saguinus bicolor), native to the Amazon rainforest, is a stunning example of the curiosity and diverse and unique biosphere of the region. Located in a small region north of the Amazon River in Brazil, it is critically endangered due to ongoing habitat destruction. Its mischievous hairless black face, standing out in strong contrast to its white, brown or silver fur, gives it its name.

The Bare-Faced Tamarin typically weighs around 430 grams (just under a pound), with a prehensile tail up to twice its body's tiny 200 mm (about 8 inches) length. It subsists primarily on a diet of fruits and flowers, but in the dry season has been known to eat various beetle and grasshopper species. It employs a unique hunting method in pursuit of these delicacies, sitting still on a branch for tens of minutes at a time until a choice bug lands within reach, then lunging out for the kill.

One of the most unique aspects of Saguinus bicolor is its highly communal family system. Only the alpha female gives birth, but when she does, the whole tribe of 5-15 contributes to the babies' welfare. Even the males get in on the action, providing most of the carrying for the young. Over 80% of births are twins, suggesting a link between female alpha behavior and a propensity for twinning. Since each tribe only produces 1-2 young once every six months, it's easy to see why the Bare-Faced Tamarin is endangered.

The community-centered Saguinus bicolor has a complex system of communication, relying on tens of different whistles and chirps for purposes as varied as warning of predators, pointing to good food sources, and signaling to mate. Tremendously complex communication also happens on chemical and tactile levels. Multiple marking hormones are available to the tamarin, released by rubbing its sternum and genital regions on trees, rocks, or other tamarins, depending on the creature's purpose. Males and females both engage in grooming, both between mates, offspring, and, interestingly, between rivals.

Its major predator is humans and human involvement, but sick or weakened Brazilian Bare-Faced Tamarins have been known to make a nice snack for small wildcats, birds of prey, or large snakes. Generally, however, communal behavior is strong, and this little monkey has been able to ward off attacks from animals many times its size simply by ganging up and acting as a team to protect all the members of the group. However, with greater and greater habitat destruction, combined by hunters interested in its thick fur and locals who eat its meat, this communal behavior has proven fruitless against the attacks, intentional or not, of humanity.

Picture of the Brazilian Bare-Faced Tamarin by Whaldener Endo, licensed under GFDL

Some facts about the
Brazilian bare-faced tamarin