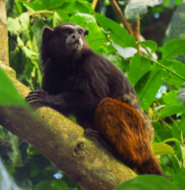 The Saddlebacked tamarin (Saguinus fuscicollis) is a small primate that lives in South America. It is also sometimes known as the brown-mantled tamarin or saddleback tamarin. These little monkeys are related to, but are larger than marmosets.

There are many subspecies of Saguinus fuscicollis, so the Saddlebacked tamarin coloring can vary greatly but generally, this monkey’s shoulders, forelegs and tail are a darker color, while its back and hip area are a mixture of black, yellow and orange hair. The underside of this monkey is usually a dark red. However, the main coloring of different subspecies of the Saddleback tamarin can also be bright orange, black or white. Some of the lighter monkeys may actually appear to be all one color.

The saddleback tamarin is typically 17 to 27 centimeters long or 7 to 10 inches, not including its tail. Its tail is typically 43 centimeters or about 17 inches long. Saddlebacked Tamarins weigh approximately 338 to 436 grams or about 12 to 15 ounces. These monkeys have non-opposable thumbs and their digits – except for the big toe on each foot -- are claw-like.

These monkeys are diurnal, meaning they are most active during the day, and they live on a diet of fruits, insects, nectar, tree gums, and flowers. They will also dine on small animals and frogs. Their preferred habitat is the lower layers and the understory of primary, as well as secondary forests. Saddlebacked tamarins move on the ground by walking and running on all fours. In the trees, they swing from branch to branch, and they also use their strong claws to scramble up trees.

The saddlebacked tamarin is a social animal and lives in a group that ranges in size from between four and twenty animals. They are known to co-mingle with other species of primates, including moustached tamarins and Goeldi's marmosets. Only the dominant female in a group of saddlebacked tamarins will mate during a breeding season. She will then typically give birth to twins that are reared with the help of the entire group.

These primates are still quite common and, therefore, it is currently listed as a species of least concern on the IUCN Redlist. These little monkeys are, however, hunted for food by locals and are also captured as part of the pet trade. The saddlebacked tamarin is also preyed upon by eagles, hawks, snakes and members of the cat family, such as the ocelot.

Surprisingly enough, as recently as 2009, a new subspecies of saddleback tamarin, the Saguinus fuscicollis mura, was discovered by scientists in Brazil in a remote region of the Amazon.

Picture of the Saddlebacked tamarin by D. Gordon E. Robertson, licensed under GFDL 1.2.

The Saddlebacked tamarin, spix's saddle-back tamarin is listed as Least Concern. Does not qualify for a more at risk category. Widespread and abundant taxa are included in this category, on the IUCN Red List of Threatened Species

Some facts about the
Saddlebacked tamarin