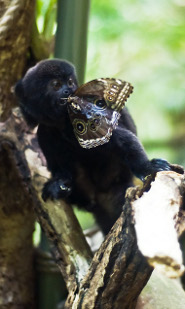 Marmosets are found in three categories, the tamarins, the true marmosets, and the Goeldi's Monkey or Goeldi's marmoset (Callimico goeldii). The Amazon River Basin is its main habitat. It is black in color and has a mane. This species does not give birth to twins and is different from other marmosets, since it possesses three sets of molars. Previously, the Goeldi's monkey was believed to be an evolutionary species between New World Monkeys and the other marmosets, but molecular genetic recently indicated that it belongs to the marmoset species.

The lower canine teeth of real marmosets (the Callithrix genus) are short while the lower teeth of the other species called tamarins marmosets are comparatively longer. The smallest real marmoset, the pygmy marmoset, lives in the upper parts of the rainforests in the Amazon River Basin region. Pygmy marmosets are just 14 cm long from head to body and its tail is relatively longer. The weight of the adult marmosets is about 3 ounce (90 grams), whereas the other species of this family attain 1.3 pounds (600 gm or 21.16 oz) or more.

The Goeldi's marmoset is blackish-brown or blackish in color and there is hair on its head and the tail sometimes has white, red, or brown colored highlights with silver lining. The length of the body is about 20 to 23cm (8 to 9 inches), and its tail is about 25 to 30 cm (10 to 12 inches) long. The Goeldi's monkey was discovered in 1904 by Emil Goeldi.

At 8.5 months, the females become sexual mature while the males mature sexually at the age of 16.5 months. After 140 -180 days the young are born. The female is capable of giving birth twice a year. Unlike other species of this family, the mother bears only one baby at a time. The mother takes care of the baby till the initial 2-3 weeks and then, the father takes the responsibility of the baby except for satisfying its nursing requirements. The mother feeds the baby only up to the time it becomes 65 days old. The ratio of female to male is 2 to 1 and they can live up to 10 years in captivity.

Goeldi's monkeys like foraging in scrubby but dense bushes. This is probably the reason that this species is very rare. They live in separate patches at a suitable habitat, which are separated by kilometers of unsuitable flora. In wet seasons, it feeds itself with fruits, lizards, insects, spiders, snakes and frogs. In dry season, it survives on fungi and is the only tropical primate known to thrive on such a source of food. It lives in small groups of 6-7 individuals and stays within a distance of a few feet of each other.

Picture of the Goeldi's marmoset by Alexandre Buisse, licensed under GFDL

The Goeldi's marmoset, goeldi's monkey, goeldi's tamarin is listed as Near Threatened (NT), is close to qualifying for or is likely to qualify for a threatened category in the near future, on the IUCN Red List of Threatened Species

Namings for the Goeldi

A young / baby of a Goeldi is called a 'infant'. A Goeldi group is called a 'troop, barrel, tribe or cartload'.

Some facts about the
Goeldi's monkey