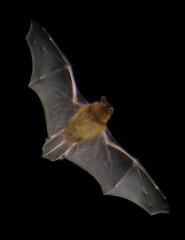 The Common Pipistrelle (Pipistrellus pipistrellus) is a species of small bat found over most of Europe, North Africa and southwestern Asia, and especially the British Isles. It is 1.75-2.5inches (33-48mm) long and has a wingspan of up to 8-10 inches (19-25cm), the forearms being 1-1.5 inches (28-35mm long). It generally has dark to chestnut brown fur, with it ventral fur being paler. The ears are short and triangular with a rounded tip, and the wing membranes tend to be opaque. The average weight of the Pipistrelle is 4-8g. It is most commonly found in woods are farmland, but also inhabits towns, often in lofts and buildings and can be seen in the evening sky when the sun just starts to set or has set.

Their summer roosts tend to be in the cracks and crevices of old buildings, behind paneling, even in shutters and eaves. The most common building for them to roost is an old barn or abandoned structure since it is quieter and offers peace. During the winter they are most commonly found in trees and buildings, rarely dwelling underground in caves. They emerge around 20 minutes after sunset, earlier on warmer nights and have been know to fly in daylight, although their senses are not as acute for daylight travel and they are vulnerable to predators. Their flight is erratic but agile, generally 15-30 feet (5-10m) off the ground. Males occupy the same territories all year round and fiercely defend them during the mating season, when the species smells strongly of musk and emits unique social mating calls to entice the female bats.

When foraging over water the Common Pipistrelle prefers areas of smooth water with trees on both banks, areas known to be abundant with the flying insects that make up their diet. Individuals will follow the same light routes every night, though the foraging becomes intermittent throughout the night and is very dependent on temperature (greater than 8 degrees Celsius), and their reproductive state. Their prey is consumed during flight and the Pipistrelle has been known to forage up to 5km from its roost in search of insects.

Interesting Facts about the Common Pipistrelle:


Picture of the common pipistrelle by Barracuda1983, licensed under GFDL

The Common pipistrelle is listed as Least Concern. Does not qualify for a more at risk category. Widespread and abundant taxa are included in this category, on the IUCN Red List of Threatened Species

Some facts about the
Common pipistrelle