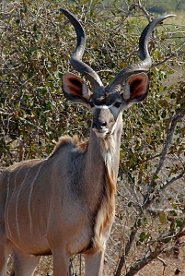 The greater kudu (Tragelaphus strepsiceros) is a very large and handsome African antelope. The males bear huge spiraling horns that can corkscrew up to three full turns and are arguably, the most spectacular belonging to any antelope in Africa. The average length of a male greater kudu's horns is 48 inches in length, although the largest on record measured 72 inches. Female greater kudus do not have any horns.

Greater kudus are the second tallest antelope in Africa. An adult greater kudu typically stands between four and five feet at the shoulder (100 cm to 160 cm) and can weigh between 264 and 693 pounds (120 to 315 kg). Males are typically about 50 pounds heavier than the females. The coloring of the greater kudu ranges from a reddish brown to taupe to a bluish-gray. The coat on its torso bears approximately six to ten thin, vertical white stripes. The greater kudu's head is marked with a white chevron between its eyes, and it also has small cheek spots. Males greater kudus sport a beard, and both sexes have an upright mane.

The greater kudu can be found in many of the southern countries of Africa, including Zimbabwe, Namibia, Mozambique, Angola, Botswana, South Africa, Swaziland. In east Africa, they can be found in the countries of Djibouti, Sudan, Central African Republic, Eritrea, Ethiopia, Chad, Malawi, the Democratic Republic of the Congo, Kenya, Somalia, Zambia, Uganda and Tanzania. They typically live in scrub woodlands and lightly wooded areas where they can find shelter and where their coloring helps them blend in well with their surroundings.

The greater kudu is a browser that feeds on leaves, vines, flowers and grass. During the dry season, one to three females and their babies will band together for company. In the rainy season, larger groups of up to 20 to 30 greater kudu females may form. Males usually remain solitary, though some do form bachelor groups. During the mating season, males typically try to prove their dominance peacefully with a lateral display in which one male will try to prove to the other he is the bigger animal. Occasionally, male greater kudus will fight for supremacy by battling with their horns. Tragically, the males have been known to accidentally entangle their corkscrewing horns so severely that they cannot get loose and both animals eventually end up dying.

This antelope is a shy animal with large ears that help it hear well. If something frightens it, the greater kudu will bound away in huge leaps. Once it reaches what it believes is safety, it will stop and look back before bounding away again.

Predators of the greater kudu include lions, leopards, spotted hyenas, cape hunting dogs and humans. Unfortunately for the greater kudu, its spectacular horns have made it a prized trophy for many hunters, and locals also hunt it for its meat. The greater kudu is not currently regulated by CITES and the IUCN considers them as Least Concern on its list of threatened species.

Picture of the greater kudu by L0k1m0nk33, licensed under GFDL

The Greater kudu is listed as Conservation Dependent (LR/cd), the focus of a continuing taxon-specific or habitat-specific conservation programme targeted towards the taxon in question, the cessation of which would result in the taxon qualifying for one of the threatened categories below within a period of five years, on the IUCN Red List of Threatened Species

Some facts about the
Greater kudu