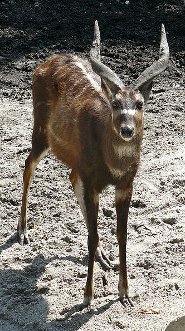 The sitatunga (Tragelaphus spekii) is an antelope native to the swamps of Central Africa. The animal's habitat is mainly in southern Sudan, Cameroon and the Democratic Republic of Congo, but also extends into parts of Botswana, Kenya, Zambia, Uganda, Gabon and Tanzania. Body length is about 115 to 170 centimeters (3.5 to 5 feet) with a shoulder height of 75 to 125 centimeters (2.2 to 4.1 ft.). The animal's tail length is about 30 to 35 centimeters (12 to 14 inches). Weight ranges from about 40 to 120 kilograms (90 to 260 lb.) Males tend to be larger than females.

While there is some variation in coloring, the sitatunga is usually brown with males tending to be darker and females taking more of a reddish hue. Both sexes have white markings on the body and face. Males have a mane and twisted horns which can reach almost a meter in length. The sitatunga has long, splayed hooves which are ideally suited to its habitat, allowing it to walk in swampy conditions without sinking into the mud.

The sitatunga is unusual among antelope species in that it is quite at home in water. In its native habitat the animal is often seen taking to the water to avoid predators, and individuals have been known to sleep underwater with only their nostrils showing above the surface. This type of "snorkel" behavior is an adaptation to the hostile environment in which the sitatunga lives, since water often provides the only refuge from leopards and wild dogs.

The swamp is an abundant source of food, so sitatungas need only small home ranges. They often make feeding pathways through the water plants, eating reeds, bullrushes and sedges. They will also venture out of the swamps and eat grasses, fruits and tree bark in the adjacent forests. They are sometimes active during full day or on moonlit nights, but their time of greatest activity is in twilight (dawn or dusk).

Sitatungas are social to some extent. Females are sometimes seen forming herds, but males often have a solitary lifestyle except at mating season.

Their greatest threat is human activity. In parts of Africa the animal is a vital source of protein to indigenous peoples, but there is also much sport hunting for trophies. The sitatunga's habitat is being constantly reduced as growing human populations convert more of the swamp into agricultural land. Other predators that threaten the sitatunga are pythons, crocodiles, leopards and lions.

The Marshbuck, sitatunga is listed as Near Threatened (LR/nt), is close to qualifying for or is likely to qualify for a threatened category in the near future, on the IUCN Red List of Threatened Species

Some facts about the
Sitatunga