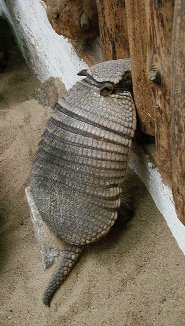 The Large Hairy Armadillo (Chaetophractus villosus) is the perfect name for this South American native, heavily armored around the body and head with thick bony plates. The difference from most other armadillos is a dense covering of long whitish or light brown hairs. These hairs cover his underparts and project from around the edges of his armor plating. It's Latin name, Chaetophractus Villosus, translates to "Hairy shell Hairy".

The Large Hairy Armadillo makes its home in Bolivia, Argentina,Chile, Paraguay, and Tierra del Fuego. They can be found from sea level to 1300 meters, in grasslands, savanna, forests, and farmland. Their species is widely distributed and highly adaptive. Some live close to human habitation, and indulge in "dumpster diving" meals, with maggots being a favorite treat.

Humans consider them pests, but also delicious. They are eaten and enjoyed quite extensively. Due to their heavy armor, the Large Hairy Armadillo's only serious predators is man. They are hunted for sport, food, or making musical instruments. They are often victims of road kill as well, due to their poor eyesight. They are prolific breeders, reaching sexual maturity at an age of about nine months. Females commonly have three litters a year with two offspring. The Large Hairy Armadillo baby looks like a little piglet wearing soft leathery armor and it makes noises not unlike kitten mews.

Large Hairy Armadillos are powerful and fast diggers, due to the long sharp claws on their forefeet. They dig burrows, simple ones for temporary shelter, or complex burrows with branches that are used for living space and raising their young. They are usually nocturnal, but during the wintertime, some daylight activity is not unusual.

Except for humans and their appetites, dogs, and cars, the Large Hairy Armadillo doesn't have such a bad life. They can be quite long-lived, reaching over twenty three years in captivity. Due to their adaptability and omnivorous diet, they have made a presence in large parts of South America.

Picture of the large hairy armadillo by Guérin Nicolas, licensed under GFDL

The Large hairy armadillo is listed as Least Concern. Does not qualify for a more at risk category. Widespread and abundant taxa are included in this category, on the IUCN Red List of Threatened Species

Namings for the large hairy armadillo

Some facts about the
Hairy armadillo