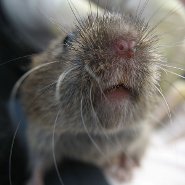 The field vole (Microtus agrestis), like all voles, is a type of rodent, belonging to the family Rodentia. Field voles have a coat of gray-brown fur covering the top of their 13 cm (just over 5.1 inch) long bodies, which provides them with camouflage in the grassland that they inhabit. This adaptation helps them to avoid predators, such as owls. Interestingly, their underbellies are, however, gray in color. Field voles can weigh anything from 14 to 50 grams (about 0.5 to just under 1.8 ounces).

Field voles are also known as short-tailed voles because, as this alternative name implies, their tails only extend a very short distance from their bodies. Indeed, everything about this species seems to be diminutive, with small eyes and little ears.

The field vole is one of the most common animal species in the whole of Europe. Thus conservationists do not consider the species to be under any threat of extinction. The range of the field vole is vast, running from the Atlantic coast to the banks of Lake Baikal. That is to say, they are found in Asia and across Europe, including mainland Britain but notably excluding Ireland.

The field vole is an important prey item for owls and other birds of prey, many of which are endangered. The population of field voles fluctuates according to a well described predator-prey pattern, with the population going through predictable peaks and troughs in cycles of approximately four years.

As nocturnal herbivorous animals, field voles predominantly feed on grass and green leaves during the night. In the summer such food is often abundant in the habitats they occupy, which include; grasslands, marshlands, riverbanks and meadows. However, during the winter food becomes scarcer and field voles may be forced to forage during daylight, which brings an increased risk of predation.

Field voles tend to construct their nests above ground; however, they do spend some of their time burrowing in order to create bolt holes into which they can run if they detect a predator. However, birds of prey are thought to be able to track the recent movements of these bite-size snacks by detecting UV light radiating from the trails that they run along.

While male field voles can be fiercely territorial, the home ranges of females commonly overlap. They have a long breeding season, which runs from March to October each year. The gestation period is really quite short, lasting only 18 to 20 days, after which the mother gives birth to a litter of up to 6 young. By human standards field voles are relatively short lived, living just two years at best but commonly falling prey to owls or kestrels well before this time. However, with a short gestation period and large litters, the population can increase rapidly in response to an improved food supply or reduced threat of predation.

The Field vole is listed as Least Concern (LR/lc), lowest risk. Does not qualify for a more at risk category. Widespread and abundant taxa are included in this category, on the IUCN Red List of Threatened Species

Some facts about the
Field vole