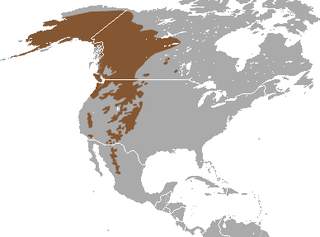 The Montane shrew is listed as Least Concern (LR/lc), lowest risk. Does not qualify for a more at risk category. Widespread and abundant taxa are included in this category, on the IUCN Red List of Threatened Species

Some facts about the
Montane shrew

Facts about the montane shrew

"(1) "The montane shrew (Sorex monticolus) is probably the most common and widespread species in the state (New Mexico).

Other Comments The name Sorex monticolus is from the Latin mons (mountain) and colere (to inhabit) (Smith & Belk, 1996).

The montane shrew, Sorex monticolus, is native to Alaska, western Canada, and much of the western United States. (Full text)

Sorex monticolus (Montane Shrew) is much like nanus, but it is larger: total length usually measures 100 millimeters or more , and the skull is more than 15 mm in length.

COLORADO 1994: In Colorado, the montane shrew is most frequently associated with the mesic habitats of aspen stands, willow thickets, moist openings in subalpine

Montane shrews are active throughout the year, during both day and night. (Full text)