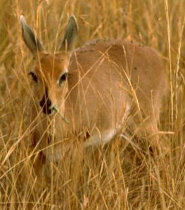 The Oribi (Ourebia ourebi) graze the floodplains and wide open grasslands of South Africa along the northern section of the eastern coastline of the cape. The Oribi are considered by avid naturalists to be a pure and true grazer who survives mainly on young sprouts and other flora for sustenance.

The average animal measures approximately 100 centimeters (45.4 inches) in length and weighs roughly 15-20 kilograms (33-44 pounds). Interestingly, Oribi rams are stouter in stature than ewes. Oribi rams boast horns which are on average over 100 millimeters (4 inches) in length and are ringed at the base of the antler. Also, Oribi rams use pre-orbital glands in order to mark their territorial boundaries. But as a species, the Oribi population is at best scattered and sparse.

Oribi, distinguished by a black tail and white accents around the animal's snout, achieve its peak breeding period during the months of November and December. The incubation period for a single Oribi lamb is approximately 210 days as well according to the most up to date biology on this species of South African antelope. Oribi live their lives monogamously, often seen traversing the grasslands alone or in pairs. The typical Oribi "family" consists of a ram and as many as two ewes.

Some of the rather colorful characteristics of the Oribi antelope of South Africa include the animal's comical oval shaped ears and thin, slim legs and hindquarters. The fur of an Oribi is tinted from brownish to yellowish hues, which allow the animal to better hide from the many infamous African predators in the region.

In fact, because of their small stature, the Oribi are more apt to run and hide at the first sign of danger. When startled by predators, the Oribi emits a high-pitched shriek and undergoes a unique display known as "stotting", which occurs when a beast with straight legs leaps vertically rather than laterally. Some of the Oribi's primary predators include the large cat species like leopards and lions as well as hyena.

Due to a sparse population and changes to the Oribi's habit grasslands, the tiny Oribi remain on the African endangered species list. In fact, most of the Oribi accounted for in South Africa reside on privately held lands. Few of the Oribi roam open, protected lands.

The Oribi is listed as Conservation Dependent (LR/cd), the focus of a continuing taxon-specific or habitat-specific conservation programme targeted towards the taxon in question, the cessation of which would result in the taxon qualifying for one of the threatened categories below within a period of five years, on the IUCN Red List of Threatened Species

Some facts about the
Oribi