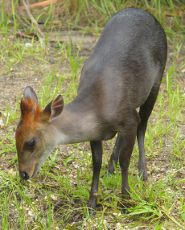 The Black duiker (Cephalophus niger) is a small antelope that lives in West Africa, primarily in the coastal countries of Guinea through Nigeria. The average black duiker is only 32 inches (81 cm.) long, 18 inches (45 cm.) tall at the shoulder, and weighs 40 pounds (18 kg.). It makes its home in dense, lowland rainforests or shrublands. This habitat is important to the black duiker as it provides protection from predators, namely eagles and leopards. In fact, the black duiker is nicknamed the "diving buck" because of its ability to dive for cover into a dense area. It does so using its long hindlegs. A unique feature of this duiker is that its hindlegs are longer than its forelegs, and the length of its legs in addition to its arched back cause the black duiker to have a bouncing gait.

Other physical traits that identify this rarely seen animal include its brown/black color; long, narrow head; short, tassel-like tail; and short (approximately six inches in length), straight horns hidden in a tuft of hair atop its head. The black duiker use these horns to fight one another. This animal is known to live alone or with only one partner and has scent glands below the eyes used to mark territory as well as each other. The black duiker feasts on vegetation such as leaves, fruits and seeds; however, it is also known to consume small birds and rodents and insects. Interestingly, though the duiker is so small, proportionally speaking, it has a larger brain than other antelopes. This may help to explain why this animal has such advanced eyesight, hearing, and sense of smell.

The black duiker appears to breed year-long, and, in captivity, they have been known to have an average lifespan of ten years. As previously mentioned, this animal is rarely seen and is considered to be near threatened as it is a target of not only its natural predators but also hunters who are interested in them for the bushmeat trade as well as their skin.


Picture of the black duiker by ucumari, licensed under the Creative Commons Attribution-Share Alike 2.0 Generic license.

The Black duiker is listed as Near Threatened (LR/nt), is close to qualifying for or is likely to qualify for a threatened category in the near future, on the IUCN Red List of Threatened Species

Some facts about the
Black duiker